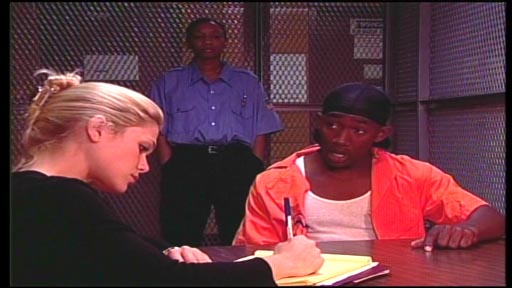 Moon Jones is the writer and director of this awful, awful mockumentary. He also stars as Luther ‘Satan’ Little, the father of three teenage boys who follow him to prison. Satan is a bad, bad dude. He’s killed people, he sells drugs, he snarls and says ‘bitch’ a lot, and he laughs when another inmate suggests that instead of playing dominoes for cigarettes, they should play for the right to have sex with the cleverest and most sensitive of his sons. Well, step-son. Satan sure is mean, but the scariest thing about the film is when, as the final credits roll over, there is a suggestion that a sequel might be in the offing. Aaaargh!

The kids, Maurice, Marvin and their step-brother Tyrone, get done for murder of a policeman – who was shot by a bullet from his partner’s gun while they were trying to apprehend the boys for theft. Although they’re 14, 15 they get put in an adult State prison with their father. A white, blonde documentary-maker, Lily White (yes, Lily White), gets permission to film Satan and the kids, the warden expecting that there will be a trade-off with the film crew’s hidden camera picking up illegal activities in the cell.

The film starts with some statistics about the number of murders committed by young men, mostly young black men, in New Orleans. It seems to want to question why it is inevitable that so many black kids will finish up in prison or follow their fathers to jail. But the strongest voice on the subject belongs to Satan, and he talks about following the example his father, being beaten by his father, that kids have to learn to survive and that when his sons came to prison they were ‘fresh meat’ like anyone else. Yep, it’s intergenerational; nothing you can do about it. To prove that point, Tyrone, the one with the best prospects, hangs himself. Then Marvin is accidentally stabbed to death by Maurice as he tries to kill his father. Nothing you can do about it.

But as murky as the message is, the real story of the film is its utter awfulness. The acting is pitiful. The direction is woeful. The production quality is terrible. And the script is embarrassing. My favourite line, I think, is when filmmaker Lily is granted access into Satan’s cell – a rare privilege for a filmmaker, I’d say, if not a bit dangerous if you’re about to confront him about his parenting. This is his turf. They’ve just met and he mutters, “Stupid bitch”. Lily is indignant: “Excuse me?! I’m not here to be insulted; I’m just here to get my job done!”

If it were a better film, it would be depressing: the whites are generally stupid, corrupt, or patronising, and the African Americans are depicted as very often remorseless, unprepared to accept responsibility, resigned to being statistics, impotent. And if Satan is meant to in some ways be representative of his community, ready for bloody revenge.

It could be the worst film I’ve ever seen. 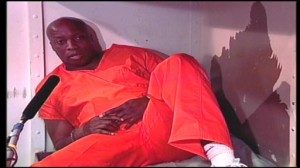