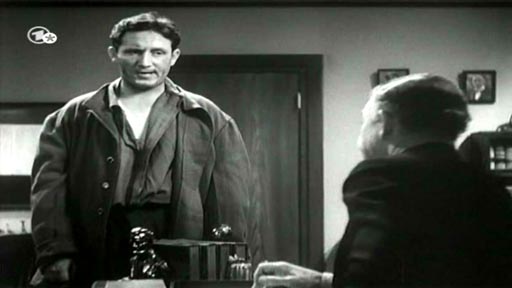 Lewis E Lawes was the Warden of New York State’s Sing Sing Prison for 21 years up until 1941 and is generally credited with pulling the prison back into line after years of mismanagement. It’s hardly surprising, then, when the film made from his book of the same name paints the Warden in a rather flattering light. The ‘20,000 years’, by the way, represent the accumulated total of the years to be served by all of the prison’s inhabitants and the same book was used as the basis for another film, Castle on the Hudson, in 1940.

In this earlier one Spencer Tracy plays Tommy Connors, a cocky tough guy who has just picked up 5 to 30 in Sing Sing, but who has been assured that money and influence will see him back on the streets in no time. The unimpeachable Warden Long (Arthur Byron) has other ideas. He’s seen tough guys before, and sets fire to the $5,000 worth of bonds he’s offered as a sweetener, and then makes Connors (who has objected to the prisoners’ uniform) walk around in his underwear in the cold to pull him down a peg. And because Connors tells him that work is beneath him, the Warden confines him to his cell for three months until Connors pleads for work. You get the picture. The Warden becomes convinced that Connors has softened when he declines to join in on an escape bid. The desperado tells his co-conspirators, just as they are releasing him from his cell, that he couldn’t go with them because it was a Saturday, a day which had proved unlucky for him in the past. Perhaps this was something they could have clarified before the escape was in progress.

Then Connors’ moll, Fay (an unconvincing Bette Davis), is involved in a car accident and is not expected to pull through. Warden Long allows Connors to go to her bedside, unescorted, after he has promised that he will return. Things get tricky. Connors gets into a fight with his lawyer, whom he no longer trusts, and Fay shoots the lawyer dead. Connors prepares to do a bunk. The Warden’s decision to allow Connors’ honour leave is subjected to tough media scrutiny, and he is set to resign… but then, happily, Connors turns up. The Warden’s judgement is vindicated! Hooray! It shows the influence that a decent, hard-but-fair prison administrator can have; turning an arrogant hood into a man prepared to surrender himself to the authorities and, as he takes the rap for the shooting, to the electric chair, in order to do the first decent thing in his life and prevent his girl from joining him in the Big House. Oh, and to honour the handshake agreement he had with the good Warden.

It’s all a bit reverential, but some of the footage is taken within the walls of Sing Sing with real prisoners (Warden Lawes not concerned about any conflict of interest between his public role and his desire to have a successful movie made of his book, seemingly) is terrific, and it’s nice to know that you can make a decision to let someone out of jail on a handshake, have that person convicted of murdering someone whilst at large, and no-one really minds because he dutifully handed himself back in.