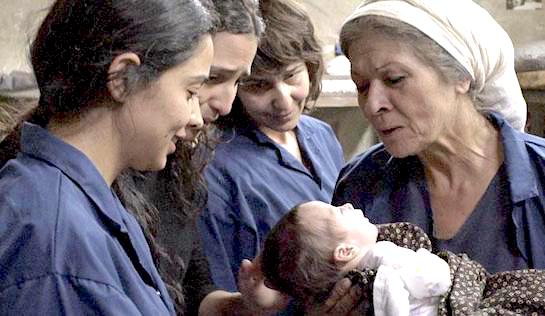 Some have heralded this representative story of one Palestinian woman wrongly imprisoned in Israel, as (aside from the overt political message) a triumph of the human spirit. It could be that, or it could just be a quiet tribute to that woman’s goodness and resilience.

Layal Asfour (Maisa Abd Elhadi) is a young, newly-married schoolteacher. She is kind-hearted… and unlucky. Driving in the West Bank, she picks up an injured young Palestinian man, and is soon taken blindfolded into an Israeli prison and interrogated for abetting an attack on the Israeli military, in which the young man was seemingly involved and one soldier was killed.

Her new husband, Farid, encourages her to tell the court that she was threatened by the accused man, but she won’t lie. She is found guilty and sentenced to 8 years.

The Israeli authorities don’t make things easier for her. The vicious head guard, Hava (Abeer Zeibak Haddad), puts her in a cell with Israeli prisoners, dominated by a slightly scary drug user, Shulamit (Raida Adon) and the not-to-be-messed-with Ze’eva (Khitan Edelbi). She is a fish out of water, and struggles. She is desperate to see her husband and the warden, Ruti (Izabel Ramadan), puts a deal on the table: you can see him, but you provide us with information about the Palestinian political prisoners – particularly the one-armed Lebanese freedom-fighter, Sanaa (Nadira Omran), who has already been in prison for 15 years on terrorism-related charges.

Layal is moved into the Palestinians’ cell… soon after finding out that she is pregnant. Ruti, and then Farid, both encourage her to abort. Farid also tells her that his visa to Canada will lapse if he doesn’t go there – and lovingly departs, leaving her to do her prison sentence and her pregnancy on her own.

Her new cell, however, is much more welcoming. Sanaa is intense, but grandmother Im Ali (Haifa Al-Agha), young mother Rihan (Anaheim Fayyad) and young women Fidaa (Hana Chamoun) and Jamileh (Rakeen Saad) embrace her warmly. Sanaa is mistrustful of her, believing that she is supplying information on them to the authorities. With equal measures of defiance and hope, Layal decides to keep her baby.

In due course Layal gives birth, alone, with both hands cuffed to the bedhead and one leg also shackled; the one free leg dangerously threatening to breach security in some way between contractions. It’s a boy! Nour. On returning to her cell, Nour has as many doting mothers and aunties as there are bunks in the cell.

A cell is arguably not the best place to raise a child, and Layal starts to wonder whether she is keeping him too long. Farid, helpfully, turns up after two years of no contact whatsoever and suggests he takes his son. No, thank you. Ultimately, the decision is taken from her; in retaliation for Layal’s participation in a Sanaa-organised strike in protest at Israel’s 1982 bombing of Lebanon, the 2-year-old is removed without warning.

And there are further horrors, including one of the prisoners being shot and killed – with the courage and dignity of the women (tear-gassed, overpowered and subdued after a destined-to-fail protest barricade) movingly portrayed. This is, after all, a film designed to sway public opinion against the wholesale imprisonment of Palestinians by the Israelis.

But there are also isolated moments when the polemic is less important: Layal rescues the Jewish Shulamit when she overdoses, and is repaid with kindness; the unbridled joy of motherhood, even in a place as dismal as prison; Layal’s grace when, under the terms of a prisoner exchange, several of her colleagues are released but she remains; the tenderness and loyalty of a fellow prisoner, the medic Ayman (Karim Saleh), whose care for Layal contrasts markedly with that provided by her husband.

Refreshingly, this is not your standard women-in-prison movie, even if some of the semi-obligatory references are there – the snitches, the corrupt guard, the manipulative warden, the drug use, the tussles between inmates, the food fight. It’s gentler-paced, for a start, but the real difference is in the two unusual combatants jostling for the title of the film’s chief villain – Israel, on one hand, and the caddish husband on the other. Oh, and there’s a child in the midst of all the chaos. It’s different. 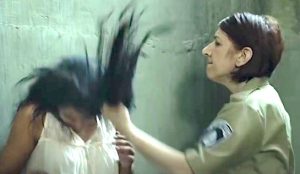 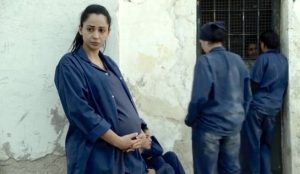 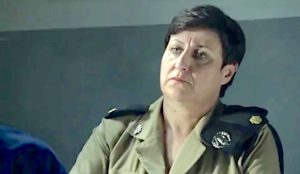 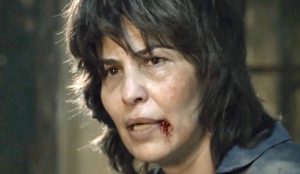 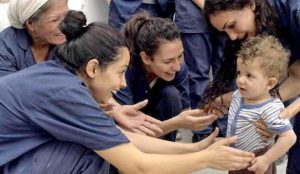 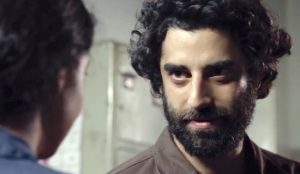