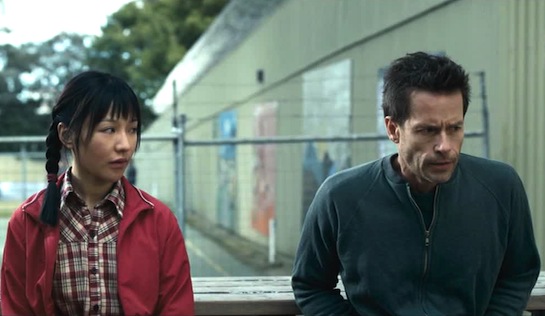 So… this is a film “inspired by real life stories”, according to its director. Presumably, then, it doesn’t rely on a single real life story of a naive young Chinese girl who travels to Australia and innocently gets involved in a car rebirthing racket while supporting her long-time sponsor, whom she discovers is in jail. It does, however, allow the possibility that it is inspired by, say, four totally unconnected real life stories: one of a Chinese girl, one of a sponsor, another of a stolen car outfit and yet another of a man in jail.

For all its good intentions, this Australian-Chinese co-production really does test one’s capacity to suspend disbelief. In it, 16-year-old Mei Mei (Zhu Lin) travels to Australia with her orphanage’s children’s choir and, while in Sydney, takes the opportunity to track down Dean Randall (Guy Pearce), whose sponsorship has put her through school for more than a decade, and who has sent her postcards filled with fictions of a happy family life, a job as a wildlife ranger and a home by the sea. She finds him instead in Long Bay Gaol, a jittery, shamed mess.

Dean has taken the rap for his brother Gary after they torched a supposedly empty print shop, killing an old man who was still inside. To square off, Gary keeps Dean safe inside by paying protection money to the prison’s standover man, Tommy Field (Matt Noble). Gary earns his money by stealing cars for Fletch (Terry Serio), a crook who cannily operates the very same prison protection racket as a sideline to his panel-beating shop.

When Mei Mei absconds from her Chinese guardians after they try to put her on a plane back home (for disobeying an order not to seek Dean out), she somehow winds up with Fletch’s car rebirthing team, detailing cars without realising that they’re stolen.  Dean finds out, and all his paternal instincts come to the fore. With the help of his welfare officer, Barbara (Claudia Karvan), he does a deal with the prison authorities – blowing the whistle on Tommy’s extortion racket – so that he can get out and rescue Mei Mei from her unwitting criminal associations.

At the film’s core is the evolving relationship between this very odd couple: Dean, at one level exposed as a pathetic fraud, but so basically decent that, despite having no money, he somehow manages to sponsor a Chinese girl, even while in jail. And the loyal Mei Mei, unbelievably naive yet unfazed by finding that her park ranger in shining armour is in fact a shammer in the slammer… and who is even then capable for the most part of assuming the role of the adult in the relationship.

Ultimately both Dean and Mei Mei find themselves at (very different) crossroads, but both fare better than the New South Wales prison officers, who (a) are too inept to remove the permanently-tooled-up Tommy from circulation, even though they know he is running amok in the prison, and (b) recklessly place Dean back in with Tommy and his gang twice after he has lagged on him. Their negligence renders Dean’s big, flamboyant sacrificial act – placing his safety on the line to protect Mei Mei’s integrity – totally unnecessary; it need not have been sacrificial at all, if only the prison had done its job and taken basic steps to keep him safe in the first place.

Oh well. For what it lacks in credibility, it almost makes up in heartwarmingness. 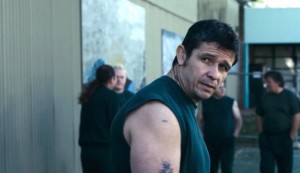 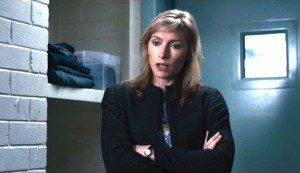