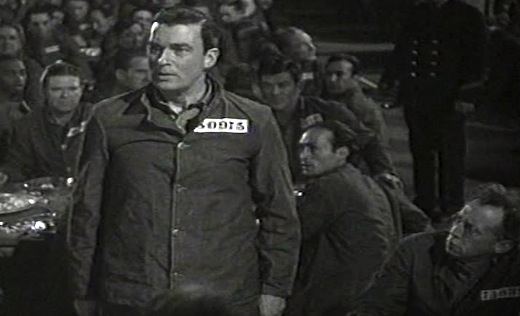 “Now listen here, you cons. When I sent you up here I thought you were rats… and now I know it.” Not necessarily the smartest thing to say to a packed mess hall when you’re a DA who has been placed in a prison amidst 6,000 enemies – many of whom you’ve personally sent up the river. And perhaps a little harsh on his new colleagues… After all, what sort of reaction did he expect?

Steve Donegan (Walter Pidgeon) is an urbane, newly-elected DA, having enjoyed an abundantly successful career as chief prosecutor. He is going after gangster Joe Silenus (Harold Huber), but Silenus gets in first; he frames Donegan on a bribery charge, using Donegan’s long-time associate, Dan Barrett, who has a gambling problem and owes $2,500 to Donegan and more to Silenus, as the patsy. Donegan ferociously maintains his innocence, but some of his old words come back to haunt him: in the theft trial of a woman named Anne Barry (Rita Johnson), who had claimed that she was framed, he tells the jury, “A frame-up? Impossible! It just couldn’t happen!” He cops 1 to 10.

The prisoner population is on the whole quite keen to meet up with Donegan again, and Silenus is even more keen that he never gets out alive to resume his pursuit of him. Donegan is overly confident of his capacity to ride it out, and when he is sheltered in a hospital ward with dementing older prisoners for his own safety, he asks the prison doctor, Malcolm Scott (Paul Kelly), who seems to be more in charge of the prison than the ineffectual Warden, to introduce him into the main population. That’s when he insults the entire population in the mess hall and is lucky to escape with his life. When he comes out of two weeks in solitary for causing the disturbance, he learns that he’s been matched against bruiser ‘Socks’ Martin (Nat Pendleton) in a 10-round boxing match. The wise Dr Scott counsels him to put up a fight and win back some respect.

It’s good advice. In front of a large crowd the smaller Donegan gets knocked down but keeps getting back up – a scene from which Cool Hand Luke (1967) later borrowed very, very heavily indeed. He wins the grudging respect of Socks and his mates, who not only tell him, as he later recovers in hospital,”We ain’t got nothin’ against ya”, but Socks tips him off about an imminent escape bid, which he’s encouraged to join rather than risk being killed in prison.

Now, Donegan had earlier met up again with the framed Anne Barry while doing maintenance work in the women’s laundry. She is less enthused about the contact than he, but he pursues her, offers to help her and encourages her to write down everything about her case. She does. On the outside, Donegan’s younger brother Phil has taken to following the Silenus gang and he discovers that Anne was also framed by Silenus… for tax breaks, no less!  The good Dr Scott facilitates Anne meeting with Donegan in the hospital ward, and they share an intimate moment or two together (well, they hold hands and Anne overly-generously notes her good fortune in being in that position with the man who wrongly put her behind bars).

From the ward, however, Donegan sees his brother (who was on his way to visit him) mown down by Silenus and his men. The resultant exchanges of gunfire between the guards and the gangsters, and then the prisoners (who have their own smuggled guns) and the guards, muddy the escape attempt, but Donegan and Anne manage to rescue Dr Scott, who had been taken hostage, and the escape bid is foiled. Donegan manages to prove he was framed, a jury likewise makes the same call on Anne, Donegan prosecutes Silenus for shooting his brother and the gangster gets the death penalty. Ta da! Oh, and Donegan and Anne prepare for a life together.

Those were the days, weren’t they?  When a few plucky rounds in the ring were enough to turn around years of entrenched hatred convicts have for law enforcers, and a few soothing words from an unapologetic law enforcer were enough to make a wrongly imprisoned girl go weak at the knees?  All a bit bizarre, but watchable nonetheless – particularly if you’re a Cool Hand Luke fan. 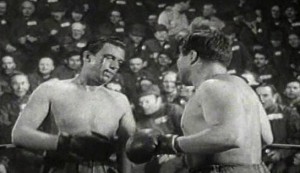 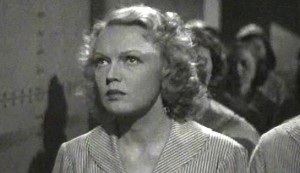 Thanks to Melian for ensuring that I have 6,000 enemies.