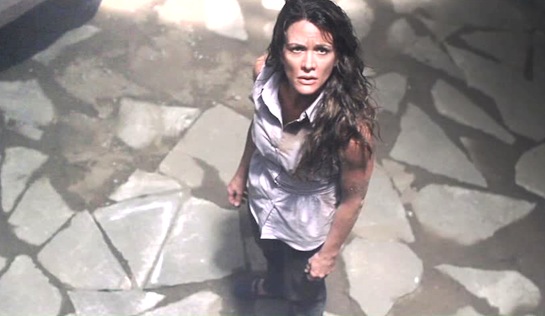 7 Stones is only 46 minutes long. It seems longer. It is a fairly opaque 46 minutes.

As the opening credits roll over, we see some scene-setting civil unrest in what appears to be a developed Asian city… Bangkok, maybe, with its anti-government rioters in their red bandanas. We then see Laura Brummels (Melissa Anschutz) being led into an remodelled medieval prison. Suddenly no-one is Asian.

Laura is – or has been – a reporter. The previous Government has fallen, and out of fear of the new regime she has written a story which has led to innocent men being sent to prison. “Now the monster I helped create has sentenced me to die,” she laments. She has just one goal before she dies; to seek revenge upon the man who killed a precious boy who – more bravely than she – refused to cooperate with the ruling party. How she might do that from her prison cell is a bit unclear, until it is revealed that the object of her hatred, Elias (Dax Spanogle) is, fortuitously, also her jailer.

The cell itself is a marvel. It is an extravagantly-proportioned stone thing with thick wooden doors and an extraordinary domed roof, metres and metres above the floor, with a big aperture at the top which lets the almost-constant rain in. It’s a bit like an eggshell with the top taken off, and I’m at a loss to understand why a small secure death-row-like cell with a ceiling would be considered a lesser option.

Laura has barely settled into this new cell, no doubt looking forward to the two raw potatoes she has been given to eat, when – lo and behold! – a fellow occupant reveals himself, living on a high beam and hitherto completely undetected by the jailers. He is Joseph (DJ Perry) – and, as luck would have it, is the former leader of the opposition, condemned to prison by Laura’s article after he wrote a subversive ‘children’s book’ which was a little too frank about the political process. He has been in jail for a year and, seemingly since a flood some time ago (“last year”, he says) which claimed the lives of many of the prison’s occupants, has been presumed dead but has been living in the cell unnoticed. Or maybe just forgotten. Notwithstanding that he has not been fed for months – living off food he can scavenge in the cell, like bugs – he looks ridiculously clean and well-nourished. Over-nourished, even. And, on the basis that Laura didn’t, upon entering her cell, say, “Ugh! What’s that stench?”, it would appear that he has remarkably been able to refrain from defecating for months and months on end, which may explain why he looks on the podgy side.

Joseph is committed to escaping, and is working on removing seven huge stones from the dome’s construction that will destroy its equilibrium and make it crumble. It would be easier, I would have thought, to work out a way to climb out the aperture. Laura, however, remains more intent on revenge and, yes, is a just little upset when Elias enters the cell and rapes her… and Joseph (perched high above on his beam) does nothing, not wanting to reveal himself or jeopardise the success of his escape plot. But, in due course, after the co-occupants have a bit of a chat, it is a selfless act on Joseph’s part that changes the game entirely.

This is quite possibly not even a prison film, it says so little about prison. It might be that it is arthousey, and I simply failed to appreciate its subtleties. It might be that it is allegorical, and I am too dim to understand it. But I do get Laura’s belated realisation that evil triumphs when good people sit back and do nothing, and in that vein I find that I cannot look upon such mediocrity and stay quiet: I am compelled to proclaim it an errant piece of nonsense. 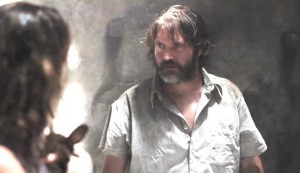 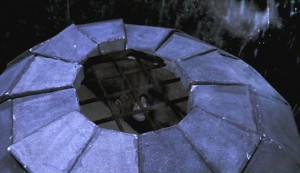