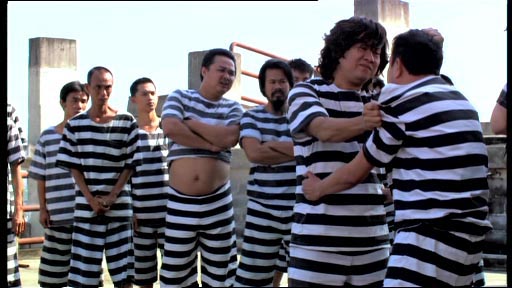 The extended Thai version of the film’s title is, I’m reliably informed, more along the lines of ‘8E88 (the punishment block or execution zone in the prison where the action takes place): Cock-a-doodle-doo, happy couple’. No, I can’t work it out, either, but it seems that ‘8E88’ in Thai sounds a bit like a cock crowing, and ‘Fan Lanla’ means something like ‘crazy lovers’. Hope that helps.

Childhood sweethearts Khun (Jaturong Mokjok*) and his beautiful fiancée Busaba (Atthama Chiwanitchaphan*) are planning for their wedding day. Minding his own business while Busaba tries on wedding dresses, Khun is prevailed upon in the street by an honest politician, Assemblyman Somchart, who has just been stabbed. The dying Somchart slips our hero a DVD and asks him to remove the knife. Khun obliges – just as the Police arrive.

Khun is charged and led off to the Central Prison. It is a comic prison, where the prisoners launch into a spoof of a Thai Life Insurance commercial, singing (in English), to the tune of Que Sera, Sera: ‘When I was just a boy / I ask my pol-ice, what will I be? / Will I be freedom? / Will I be rich? / Here what he said to me / Oh lanla, lanla…’  It’s that sort of comedy – a little bit hit and miss, a lot adolescent. Flatulence, in-cell defecation and gay themes feature prominently.

Anyway, the bad guys responsible for Somchart’s death still aren’t finished with Khun. They know that Somchart passed him a video clip just before he died, and they want it back. They arrange for Khun to be beaten up in jail, and sent by corrupt guards to zone 8E88 where he is raped three times (events treated with customary light-heartedness).

Amidst the toilet jokes and the just-violated Khun walking as though he has just got off a horse, the betrothed couple go through a rough patch, with Khun thinking that it would be the fairest thing to do to allow Busaba to move on, rather than wait years for him.

But then the bad guys send Khun a message, threatening to kill Busaba if he doesn’t deliver the clip to them in three days. He resolves to escape – a feat he manages easily with the assistance of an over-the-top-camp guard who is in league with the baddies, breaking out with his cellmates Thep and Aud. The baddies know that Khun will lead them to the clip.

The prisoners’ sojourn out of jail gives the producers licence to introduce what are apparently two staple Thai themes: ladyboys / drag queens (Khun and Thep get into drag in an attempt to avoid apprehension), and ghosts. The latter is achieved when the bad guys rough up Busaba, who responds by collapsing, dying… and returning to the fray as a ghost.

The A-team of Khun and Thep in drag, assisted by another pneumatically buxom drag queen named Burk, Som (who unbeknownst to Khun is Somchart’s feisty daughter, out to restore honour to her father’s name and find his real killers… but who doesn’t hesitate to bludgeon a security guard – perhaps to death – in order to gain access to the head office of a video store), a young man, Boss, who is Som’s friend (or brother?), and of course aided by Busaba’s ghost, find themselves in a race against the bad guys to find the missing clip which is somewhere in the store.

The clip (which shows Somchart resisting bribes from the chief bad guy, a developer) is found, the developer is exposed as a very bad guy (and Somchart’s murderer), Khun is exonerated, the bumbling Police are shame-faced and remorseful, and the grieving Khun inadvertently manages to join his beloved fiancée in the spirit world – only for Busaba to suddenly recover and cease to be a ghost. Damn.

Not your normal romantic comedy ending, it must be said. 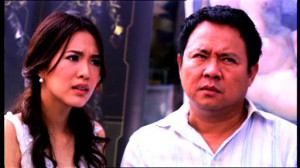 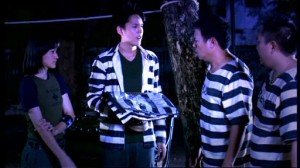