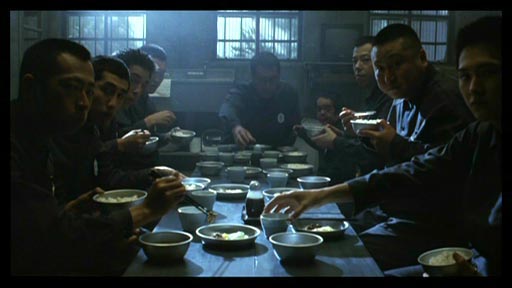 You know that uncomfortable feeling where you think that you may have entirely misunderstood a movie? If I were told that the critically-acclaimed 9 Souls is an allegorical tale about the last nine of the Japanese dynasties and I missed the point, I wouldn’t be surprised. Or I could be told that each of the nine characters represents one of Koichi Hanada’s ‘Nine Politicians who Ruined Japan’, all of whom I remain blissfully unaware – and all I could offer up is, “Oh.” It’s long, quirky, confounding and ultimately a rather bleak film. Unless it’s not.

Rather than go their separate ways, they decide to stay together – a bit reminiscent of the chain gang escapees in Take the Money and Run (1969), although these men are unfortunately not tethered together. They unwisely stick together because they’re all hopeful of tracking down some treasure hidden in a time capsule in a school at the foot of Mt Fuji, a secret location divulged by a tenth cellmate, a counterfeiter, as he was being carted away having gone completely mad. In any event, nine men are on the run and it doesn’t seem that their absence is missed because there’s no sign of them being pursued.

They flag down a van that’s dumping some garbage, then tie up the driver and head off in their quest to find the loot. Or what they hope is loot. Now, you might know that I struggle sometimes with unlikely action flick scenarios… but try this one: the van is big and red and has ‘Lucky Hole’ on its side – it’s belongs to a peek-a-boo strip club. Nine dangerous criminals are on the loose. They go through towns in their big red van, they get out of the van and the nine of them dine together (sometimes dressed as women), rob temples and stores, and are occasionally recognised… but the Police don’t seem to be able to track down the van or its occupants. It’s not that they elude the Police; the Police don’t seem to mount a manhunt. Perhaps they have better things to do. One Police car even even overtakes them in pursuit of another red vehicle. In one of the supposedly comedic interludes some of the men bugger a ram in a field. That doesn’t attract the attention of the sheep police, either.

After they reach Mt Fuji they discover that the treasure is more conceptual than actual. Over time go their own way; each has a new quest, for something important from their past – an estranged daughter, a lost love, a snaky brother – and each in his own way seeks acceptance and redemption. But they’re mostly violent and very flawed men at odds with the community… and they get rebuffed, they get turned away, they get exposed… or they get angry and revert to violence: so we get nine dangerous criminals on the rampage. Yet, after (between them) they kill an informer, a brother, and assorted others, they still don’t manage to attract hordes of expected Police. I don’t appreciate Japanese quirky, obviously.

It’s not all quirky black humour mixed with sobering reality, though; there’s pathos and bathos and even a bit of slapstick: At the Lucky Hole the one metre tall Shiratori comes into contact with a stripper who is the lucky recipient of one of his kidneys. Heart-warming; she looks very healthy. When not dressed in identical overalls, or as women, all the men wear false moustaches. Ushiyama, when outed as one of the escapees, punches himself in the face until he knocks himself out. Hmmm.

The difficulty, for me, is that nine characters are too many to get to know well, even in a longer film; consequently, one cares what happens to very few of them. And I’m unfortunately too literal to see the whimsy and overlook the big red van. 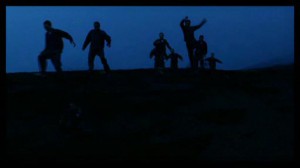 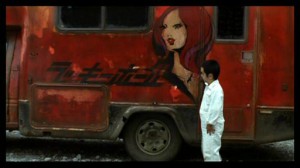