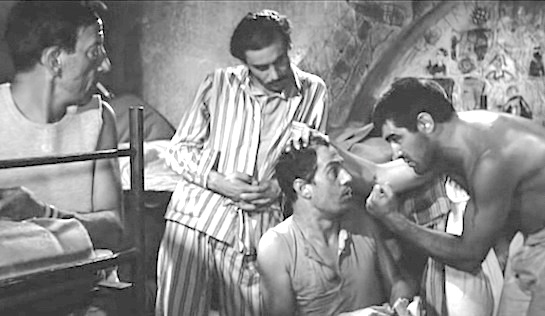 This is a classic escape drama. And a comedy, of sorts. Its story is told, in a desperate attempt at personal mitigation, by an ingenuous (and basically decent) man who gets caught up in someone else’s escape plot, and is literally dragged along for the ride. When he is on the run he declines the opportunity to bail out and go back and finish the last months of his sentence, referencing the Chinese adage about ‘riding the tiger’ (it’s dangerous to ride a tiger, but even worse getting off, because it will eat you). He’s a simple man, but might not be the complete simpleton that his fellow escapees believe him to be.

There are, though, some things about that man, Giancinto Rossi (Nino Manfredi), that encourage you to see him as not overly bright. A married truck driver with two young kids and a tattoo of a watch on his wrist, he falsifies a story of being the victim of a robbery, not realising that the person whom he asks to raise the alarm and call the police has watched him bury the loot, hit himself on the head with a rock and tie himself up. He gets three years.

In prison he works as a nurse assistant – a job no-one else wants seemingly because washing urinal and specimen bottles seems to be an integral part of the job. It’s in the medical clinic that he is leant on by three hard men: Mario Tagliabue (Mario Adorf), a lifer who chased down (for 30km, on foot) an accomplice who had betrayed him, after which he beat the man to death with his own bicycle; the wizened Gigino Campanacci (Ramond Bussières), known as ‘Il Sorcio’ (or The Mouse); and the urbane, cuckolded Dr Papaleo (Gian Maria Volonté), who killed his fiancée’s lover and would have killed, her, too, had the shotgun been double-barrelled.

Tagliabue, an imposing, angry bull of a man made angrier by a nasty toothache, ‘asks’ Rossi for a photo of their cell, then some suppositories, then the exchange of a fake hacksaw blade for a real one (used for cutting off plaster casts) in the clinic’s cabinet. Rossi obliges; what else can he do? But he is then encouraged by another prisoner to tell the warden about the apparent escape-plot-related demands in the hope of a reduced sentence. Rossi decides that’s a good idea, but before he can get to speak to the warden his cellmates suddenly engineer his ejection from their cell, and he is moved instead to the cell of the ‘three beasts’ – Tagliabue, Mouse and Papaleo. They apply some physical persuasion to him to throw in his job in the clinic and remain in the cell with them during the day, where chats with the warden are considerably less likely.

The escape plan is well advanced. The beasts have already arranged for a car to pick them up after the breakout, on a date to be calculated from the number of figs in a food parcel sent to Mouse by his girl, Maralita. They decide that it is too risky to leave Rossi behind in case he raises the alarm before they reach the wall, so he’s told that he is going with them. On the appointed day, however, the fake hacksaw is discovered by the new nurse assistant and his predecessor, Rossi, is taken from his cell to be interrogated by guards, and then the warden.

Rossi, naturally, jumps at the chance to tell the warden all he knows – the full details of the plot to escape via an inside yard and the main sewer. His story is seen as fanciful and he is sent back to the cell. The beasts are not phased upon his return; they have set it all up and were counting on him spilling the beans – and immediately proceed to escape via a hole in the ceiling (of which Rossi was blissfully unaware) and over the wall on the opposite side of the prison – while the warden’s men, having soon afterwards discovered their cell to be empty, are all clustered around an enormous discharge pipe in the pouring rain, waiting for four prisoners to emerge.

The escapees manage to elude the prison guards and their dogs… but there is no waiting getaway car. Rossi then confesses to eating three or four of the figs; they have gone three or four days early. The others beat him up. Again.

The men (or at least some of them) are on the run for the entire second half of the film. Again, there are recurring, splendid elements of farce and pathos. The men are at first holed up, deflated and hungry. Mouse volunteers to go ahead, alone, but then doesn’t come back for them. They assume he’s been caught. They push on out of the area, narrowly avoiding recapture themselves when the police chat to a woman, Maria, in her home (into which they’ve forced entry), while they stifle the sounds of her child in an adjoining room. Papaleo then splits to fulfil his mission of honour – to find and kill his ex-fiancée, Olga. And find her he does… but they reconcile over her special meatballs, and when all the escapees (by chance) are reunited at Maralita’s apartment, Papaleo has both Olga and his prospective mother-in-law in tow. The police arrive, but Tagliabue and Rossi get away, the latter of whom ultimately tracks down his wife, Ileana, in order to cadge some money so that he and Tagliabue can stow away to Africa. Ileana, it is apparent, is living with a new man, a fact that Rossi meekly accepts, and in talking with them comes to the realisation that the handsome reward money for his recapture (after he has been nominated by others as the ringleader in the escape!) could change the lives of his wife and children.

This is a disarming, droll, and immensely enjoyable film. The prison scenes are on point and a delight, as are some of the scenes on the run. When the escapees leave Maria’s house after the near miss with the police (in which she has done an exceptional job – on the threat of her child being harmed – in distracting the Carabinieri from carrying out their intention to search the place, and after which Tagliabue has tried to rape her and they eat all her food), Rossi good-naturedly apologises to her: “Excuse the bother.” He then says to Tagliabue, as they’re walking away, “How frightened she got! As if you’d have killed the child! You wouldn’t have… (would you)?” “I would, had she talked,” Tagliabue replies, and after some further nonsense justification, adds, “Besides, that kid could become a warder when grown up.” 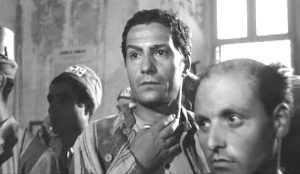 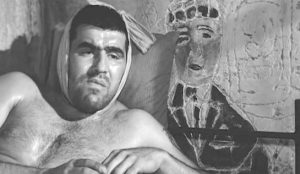 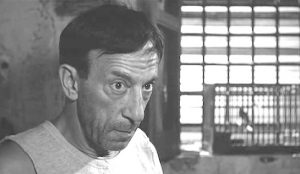 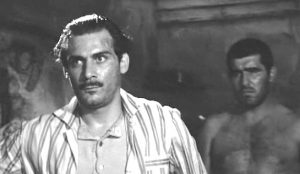 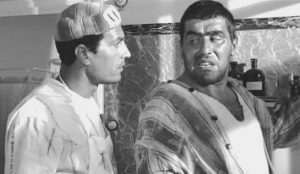 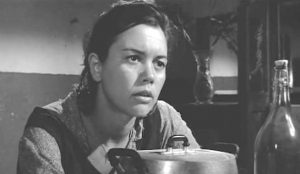 Also known as Jail Break in the UK.