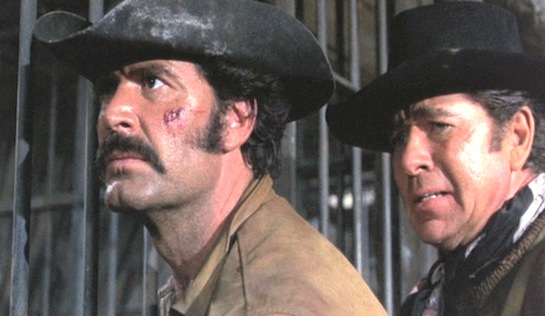 My memory’s not what it was, but off the top of my head I can’t think of another film where the hero gets himself put in jail to carry out a gold heist.

Luther Sledge (James Garner) is that hero, of sorts, in this film. He is a bandit and an outlaw – and a true spaghetti western hero; a shooter of men and a lover of women and whisky (the latter two, it seems, in moderation).

After holding up a stagecoach in which the driver accidentally gets killed (oops), Sledge retires to a prostitute and old flame, Ria (Laura Antonelli), while his partner-in-crime Mallory gets himself killed in a card game. Sledge then second senses that he is being followed by an old man (John Marley), and bails him up. The Old Man insists that he is simply following the armed escort of a $300,000 carriage-load of gold from the mines at Big Rock Canyon to a clearing house a long way away. The gold is protected en route by 40 US Army men in formation, but rather than have it sit exposed out in the open overnight, they temporarily place it in a steel-lined vault inside a big, secure prison. The Old Man claims to have been a prisoner in the maximum-security cell adjoining the safe over many years. Odd, then, that Sledge had never heard of the most massive gold procession ever; you’d think it would be the #1 discussion point around all the western highwayman water coolers.

Sledge, naturally, becomes obsessed with stealing the gold, but in trying to buy ammunition for the biggest robbery of all time he and his crew attract the interest of the local Sheriff Ripley (Wayde Preston), whose deputy Sledge happens to kill. Having escaped from that little predicament (a man down but personally unscathed), he tests out the 40 US Army men in formation, but their well-rehearsed response suggests that they might be hard to overcome out in the open. So he sets his sights on getting into the prison… and getting the gold out. His hungry band of followers is not so sure: “It can’t be taken,” they insist. But Sledge reckons that from the inside he can bust out the 500 prisoners, crack the safe open, and sufficiently distract the gold-riders to run off with the loot.

Getting into the jail is not so hard. One of his men, Erwin Ward (Dennis Weaver) assumes the role of a US marshal and knocks on the front door of the prison, with Sledge the fugitive in tow. Sledge’s reputation precedes him and they find a maximum-security cell for him, even though they normally only take prisoners from the court… but only after Sheriff Ripley, whom they have alerted, takes so much pleasure in knocking him around that the Warden accepts that it might be safer for everyone if Sledge gets banged up in his jail overnight. Ward insists on being locked up with him, so that he can be assured of the security and safety of his prey.

Fortuitously, they don’t search either of them and Sledge smuggles in a spare handcuff key and a gun. He and Ward soon manage to overpower the guards, aided by a bit of luck and some assistance from the other cons in stealing the guards’ keys, and release the prisoners from their cells, who promptly run amok and manage to arm themselves. Sledge’s crew blow up the gate from the outside and they flood into the prison. The Old Man is fortunately able to recall the combination to the safe by sound alone, and there are bags of gold for the taking. Despite much gunfire with casualties on both sides, including both Ripley and Ward, Sledge and his men are able to make good their gold-laden escape.

But the gold is not enough. The men gamble with it amongst themselves; one cheats and another shoots him. Sledge has had enough; he wins the whole lot back – leaving his men with nothing. In retaliation, they follow him to the quiet little town in Mexico where Sledge (torn between settling down and going out with guns a-blazin’) has arranged to meet Ria, and they take her hostage. The Old Man hides the gold Sledge has brought in exchange for Ria, and then Sledge – with a wounded arm in a portentous crucifix splint, is forced to take them out one by one. Yet he can’t save Ria.

All that effort and boldness and sacrifice, and ultimately no-one wins (or, alternatively, everyone loses). That, I must say, is the film’s greatest strength; it smartly avoids both a gratingly happy ending with Sledge and Ria living behind a picket fence in suburban Mexico, and the moral dilemma of an outlaw gang being seen to gain money and happiness through their misdeeds. And for prison staff, it also helpfully illustrates why it is critical to search new prisoners upon entry into the prison.

The movie, I note, has been almost universally panned by critics, but to me it doesn’t seem all that different to just about every western I’ve ever seen. And, by virtue of its gloomy ending, it seems to me better than most. 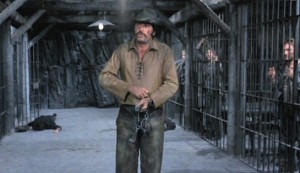 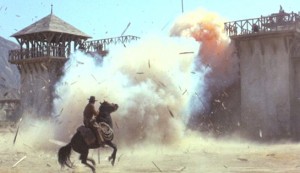 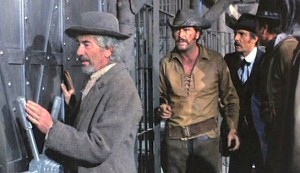 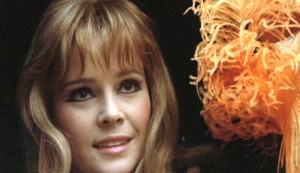