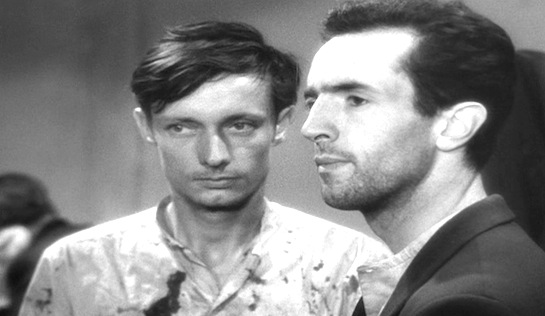 I know that featuring this film breaks my own rock-solid rule about excluding prisoner-of-war movies. I’ve included it, I think, because people quite sensibly keep prompting me, “What about Robert Bresson’s A Man Escaped?” and I just wanted to let people know that yes, I’ve seen it. And rate it. But that still doesn’t mean that it meets my slightly perverse, idiosyncratic rules about what constitutes a prison movie.

Known in French as Un Condamné à mort s’est échappé (‘A man condemned to death escaped’), it is, not surprisingly, about the escape of a man who has been condemned to death. That it is based on the real-life memoir of André Devigny, who on the day he was due to be executed escaped from the Nazis’ Montluc Prison in Lyon in 1943, makes it more compelling.

Here, Resistance fighter Lieutenant Fontaine (François Leterrier), who has been arrested by the Gestapo in connection with the bombing of a bridge, makes a foolhardy attempt to run from the car in which he is being taken to prison. He’s nabbed, beaten, then lodged in handcuffs in a Montluc cell. He knows that there is little chance of getting out of there alive… unless he can manage to escape. The opportunities are scant, the cell looks secure and the prisoners’ time out of cell, for silent ablutions, is brief. He gets little help from the other prisoners with whom he steals a few words and exchanges furtive notes.

Extraordinarily, Fontaine finds a way to break out, using a spoon to strip away the wooden panels on his door. He constructs ropes and grappling hooks and neither they nor the damage to his cell is detected. Nor does the disappearance of a parcel full of clean clothes (or his continued wearing of his old, bloodied ones after the new ones arrive) arouse any suspicion. And then, as he is sentenced to die and time is running out, a second prisoner – a young boy, François Jost (Charles le Clainche) is placed in his cell. Can he be trusted, Fontaine asks himself, or will the kid inform the authorities of the advanced state of his preparations?

He has a difficult choice. Abandon his escape plans, and die. Proceed and risk being informed on, and die. Fail, and die.

A Man Escaped shares several characteristics with that other fabulous French film, Le Trou (1960): meticulous, ingenious escape planning, an outsider who threatens to wreck it all, a focus on the ordinary, on routine. And it has some features – conundrums – all to itself: a committed, brave doer seemingly overwhelmed at times with hesitancy, with caution, with planning. Terrific.