‘Locked up in a Turkish prison’ has been the most reliable shorthand description of the horror of being a foreigner locked up abroad (or of any worst imaginable horror, really), probably since Midnight Express (1978). But the ordeal of Briton Billy Moore in A Prayer Before Dawn might have a few people viewing Thai prisons as the new high water mark. Or low water mark.

Like Midnight Express, A Prayer is based on a true story. Billy (Joe Cole) is a drug-addicted boxer who is arrested for drug possession and sent to the fearsome Klong Prem prison in Bangkok. He stands out. He looks ridiculously pale in amongst the brown sea of locals, most of whom (at least in his sleeping quarters) seem covered top-to-toe in gangster tattoos. He is suffering badly from withdrawal; aching and desperate for a hit. Despite him being an angry, impulsive, drug-craving, rather unlikeable man, you immediately feel for him; his out-of-depthness and vulnerability.

Jean-Stéphane Sauvaire’s direction conveys these things beautifully. The prison (shot principally, it seems, at the main Cebu Prison in the Philippines) is furious and chaotic and frightening. Hand-held cameras and a cacophony of sound (including much shouting and excitable chatter in Thai, most of which is not translated, adding to the sense of isolation), create a sense of frenetic unpredictability. It is an environment over which Billy has neither control nor comprehension. It’s hot and crowded and shifting; he is new and cut off by language, culture and loyalties. He has no personal space; there is just enough room in the dormitory for all of them to lie down on their bed packs on the floor, crammed side by side. The first person whom he sets up next to has already died. There is no room for sentiment.

Late one night he witnesses the gang rape of a slimly built young man. The next morning the rest of the dormitory’s occupants pay the man’s lifeless hanging body no heed as they calmly go about their business. Billy knows not to say a word. But he gets into fights, offends his fellow prisoners, lags one local to save his own skin, has several sojourns in the punishment cells and for a time wears heavy chains around his feet; an unwanted fashion accessory. He borrows cigarettes he can’t repay, falls for an attractive ladyboy, Fame (Pornachanok Mabklang), and gets enraged when he realises that he might not be her only special friend. He can probably fall no further.

He manages to bribe his way into the Muay Thai training squad as a last ditch attempt to find purpose. He learns quickly, overtakes the locals and becomes the inter-prison Muay Thai boxing champion; an act of personal redemption. And through his boxing, he wins respect.

The story itself is not so extraordinary. Or, rather, it is a most remarkable story but Billy’s rise and fall (or fall and rise) lack complexity and subtlety; it’s not the account of how he picks himself up off the floor that is compelling. The film’s power is in its depiction of foreignness; in its commentary on the vulnerability of the outsider. The prison has its own order; the staff are mostly professional (although one does steady business peddling drugs), and selected prisoners keep control of their own. But the prisoner group is a tight-knit and bound by rules and values and language and shared experience in which Billy does not fit and cannot fit. Until he boxes.

This is not the foreignness of Midnight Express where every Turk is brutal, moronic or corrupt. It’s a different world where it is the volatility, the inability to understand all that is going on… that is unsettling and creates the feeling of unease and exposure.

There are plenty of brutal foreign prison movies. Not many seem to have the credible feel of this one. Visually and thematically it is an impressive film. 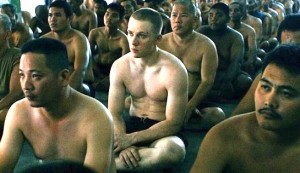 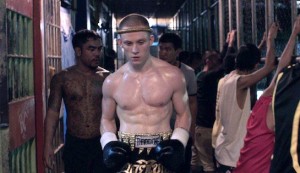