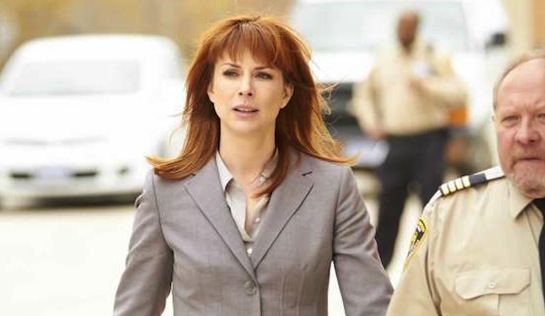 Roundwood Prison’s Warden, Samantha Brandtt (Diane Neal) has a lot going for her. She is smart, attractive, compassionate, forthright, tough, an exceptional prison administrator and a highly skilled hand-to-hand combatant. But her 16-year-old daughter Kit (Jodelle Ferland) resents her success and blames her job for the break-up of her parents’ marriage. Oh, and her staff are almost uniformly corruptible and cognitively deficient.

Roundwood is a smallish, regional, medium-security prison. Vic Miller, on the other hand, is big: Michigan’s latest cause célèbre – a psychopathic, attention-seeking, multi-millionaire playboy convicted of murdering five women and suspected of killing another dozen. He is sentenced to 280 years without parole, and it is determined to place him at little ol’ Roundwood to kick off his sentence. Really? Really? His reception into the prison is enacted in front of massed TV cameras, while another mob of reporters is let into the Warden’s office. Um, really?  With the cameras trained on him, Miller jumps at his final chance to get a message out to the public – and offers any viewer $50 million if they can break him out of the jail.

The public don’t need to be enticed twice. Within minutes, it seems, a lone crazy armed with a rifle has taken out the affable guard at the (perplexingly low-security) prison gate before being shot dead himself. And three crime scene investigators who turn up in response to those fatalities turn out to be three more hopeful Miller-springers, thwarted only by the good Warden’s last-minute, single-handed intervention. Brandtt quickly appreciates the extreme risk to her prison’s security and calls for assistance to defend it (not, interestingly, for Miller to be moved).

But while Brandtt’s dithering boss, Durksen (Dave Brown), keeps baulking at calling in the National Guard due the blow it might cause to his political ambitions, her chief guard Davis (Tom Anniko) is busy scheming to take the money and run. He convinces almost all the other staff to go home (each promised $100,000 to vacate their posts, with none seeming to give their dead colleague a second thought), leaving Brandtt and just a couple of loyal guards to prevent Davis and his cronies from busting Miller out. Now, even if Davis were successful in getting away, let’s say, would any of those other guards really think that they could return to work the next day, collect their 100 grand, hold on to their jobs and not be charged with abetting the escape? No, really?

Despited Brandtt getting kitted up in impressive combat gear, Davis’s plan proves alarmingly effective and Miller manages to break out – taking Kit (who had snuck into the prison, worried about her mother) hostage and along for the ride. For our heroic Warden, it suddenly turns personal. And the prison system head, Durksen, realising that his career is in tatters, also decides in desperation to chase the $50 million for himself. Really?

I just love these action thrillers. Can the super-Warden track down the ruthless monster holding her daughter hostage?  Can she do so with the assistance only of a middle-aged black prisoner, Quaid (Ernesto Griffith), who has just been denied parole? Will the corrupt Davis and the psychopathic monster prosper? Can Warden and daughter be reconciled?

More critically, can the Warden find anyone to run her consequential thinking classes after it’s all over?