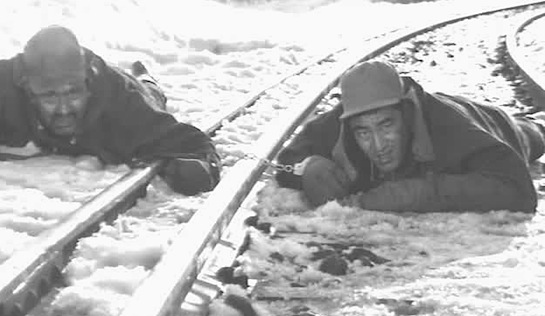 When I finally caught up with Abashiri Bangaichi I’d just seen Runaway Train (1985) – another film with two prisoners escaping through ice and snow and then engaging in communion with a train. This one has more snow, but a lot less train. And lots, lots more The Defiant Ones (1958).

Despite being perhaps a tad derivative, it has a classic prison movie feel. It was also extraordinarily popular in Japan – spawning another ten or more Abashiri yakuza genre films (including three more in 1965 alone) starring Ken Takakura… and then some more again.

Takakura’s character, Shin’ichi Tachibana, is an inherently decent young man who escapes an abusive stepfather and finishes up in the yakuza and serving three years for causing injury. He is sent to the unforgiving prison in Abashiri, Hokkaido, where winters are bitterly cold and it snows an average of 124 days a year. He feels guilty that he has abandoned his sister and his ailing mother, who has recently been diagnosed with breast cancer.

The self-appointed leader of Tachibana’s 9-man cell is Heizo Yoda (Tôru Abe), who is serving 15 years for murder and arson and claims to be ‘like a brother’ to the legendary Onitora, the Eight Men Murderer. The yakuza members naturally sit at the top of the hierarchy.

A couple of years into Tachibana’s sentence, Yoda, his mate Gonda (Hirochi Nanbara), a yakuza ruffian, and most of the other cellmates decide to escape, and lean on Tachibana to join them. He’s in a bind; he hasn’t long to serve and is hopeful of parole so that he can go home to see his sick mother, but realises that to not go with the others places him at risk of being labelled as a ‘betraying dog’. He doesn’t squeal, and he doesn’t bail. But he’s aware that the others intend to kill the elderly Torakichi Akuta (Kunie Tanake), who is seen to be too old to escape with them, and he tips the old man off without tipping him off.

Why they don’t wait until summer to escape, when temperatures rise above 20°C, is anybody’s guess; they clearly enjoy challenges with a higher degree of difficulty. One of the group feigns illness overnight in an attempt to get the guards to open the cell door. Old man Akuta repays Tachibana’s concern for him by assuring the guards that the ill prisoner will be fine by morning – averting the ambush but so upsetting the others that they want to sacrifice him on the spot. But Akuta, although a little ancient, wrests control of the knife that was intended for him, and holds all the others at bay – in doing so revealing himself as the ageing Onitora, the Eight Men Murderer… and exposing Yoda as a big-noting fraud.

The men are still keen to escape, however, and soon afterwards Gonda jumps from the truck taking 30 men to a wood-cutting site – while chained at the wrist to a very reluctant Tachibana. Others opportunistically escape as well, but are quickly detained at gunpoint. Gonda ambushes one guard, steals his gun and shoots him. He and Tachibana make good their escape through deep snow, pursued by other guards. How they manage to get so far away from their pursuers under such dire conditions is a little beyond me.

They break into a farmhouse, looking for food and a means of removing their chains, and startle the owner – a woman, whom Gonda assaults on their way out. Gondo then takes great delight in telling Tachibana that the woman is the wife of Officer Tsubaki (Tetsurô Tanba), Tachibana’s parole officer, a thoroughly decent man who has been working hard to secure Tachibana’s release. Not for the first time Tachibana assaults Gondo with the one hand that is not handcuffed to his co-escapee.

As their pursuers close in on them, the two runaways jump on a tramway cart and Tsubaki, hurt and angry, jumps on another, following it downhill at high speed. The escapees manage to jump off their cart and again evade capture. They later find a railway line, across which they place the chain that is keeping them together. A train soon slices through the chain, but collects Gondo at the same time, severely wounding him. Tachibana, newly free, considers going on alone, but goes back to help his injured partner, reminded of the man’s humanity when he hears him calling for his mother. At that point he is apprehended at gunpoint by Tsubaki, who wrestles with whether he should shoot them both.

Ultimately the good and decent Tsubaki decides not to kill them, and he and Tachibana get Gondo to a place from which the wounded man can receive medical attention. Gondo duly confesses all, absolving Tachibana, and Tsubaki softens and gives Tachibana the news that his mother had an operation and had made a good recovery. Tachibana is a happy yakuza.

It’s a most admirable prison flick. Summer in Abashiri doesn’t rate a mention; the harshness of the prison environment is entirely bound up in the harshness of the cold, cold climate. We see virtually nothing of the prison regime, but much of the prisoners at work, toiling in the snow, cutting and carting wood. We see the men – almost exclusively shallow, self-promoting, and rejoicing in their criminality – plot and boast and fantasise about life on the outside. Only Tachibana and Akuta (and possibly a prisoner who survived a murder-suicide pact), appear to have any moral compass.

The mounting pressure on Tachibana as he struggles to hold it together as his chance of parole seems to have slipped, and as his desperation to see his mother grows and he wonders whether he will only achieve that by escaping, is pivotal to the film’s success. His subsequent inadvertent escape through soft snow is tough physically and mentally, his torment heightened by his loathing for Gondo and the realisation that he has almost certainly blown any chance of imminent release.

It’s a film well worth the admission price, even if the odd-couple-chained-together-and-on-the-run was done before in The Defiant Ones. I’m not so confident about the quality of the avalanche of sequels. 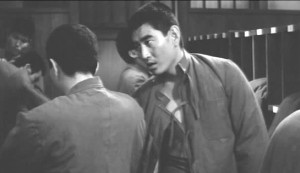 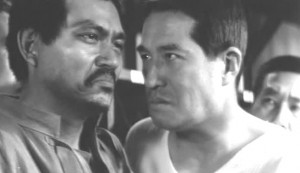 Also known as ‘The Man from Abashiri Jail’