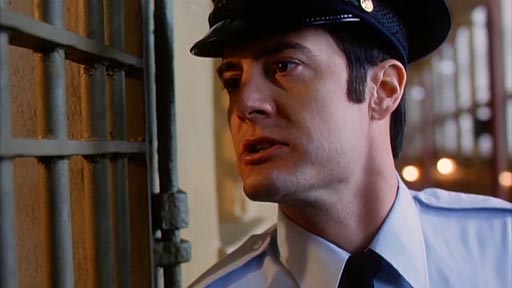 If there’s another prison movie where it is a prison officer with whom the viewer is asked to identify most, I can’t think of it. Well, Brubaker, I suppose, but he was the Warden. And The Green Mile, but it wasn’t Tom Hanks’ prison experience, exactly, that you were asked to share.  So this is a bit different, from the outset.

It looks at the September 1971 Attica (in upstate New York) riot from the perspective of Michael Smith (Kyle MacLachlan), a brand new recruit at the jail. The opening scenes remind us that real Attica riot occurred against a backdrop of protest against the Vietnam War and racial tensions. The previous month an armed George Jackson, who had set up a Black Panther chapter in prison, had been shot and killed by guards at San Quentin.  Tensions were high, and the conditions for the Attica inmates (including showers only once a week, one roll of toilet paper per month, and Hispanic prisoners not being allowed to send out or receive letters in Spanish) fuelled them further.  We are asked to believe that Smith, (whom we first see long-haired and straight out of the protest movement), follows his retired father and uncle and joins ‘The Factory’ to support his wife and unborn child.

There was a real Mike Smith, seemingly, but how closely this follows his story is not clear. Smith is given no training, and within days of starting in the job is taken hostage during the riot, where lots of prisoners very quickly take over the whole prison.  The riot scenes are graphic and credible. There is friction between the prison’s superintendent, whose regime contributed to the uprising and who wants a swift (ie armed) response to the riot, and the State’s Commissioner, who wants time to negotiate a peaceful outcome.  On the prisoners’ side, too, there is tension – some of the inmates want to kill all the guards, but Jamaal X (a charismatic Malcolm X-type figure played wonderfully by Samuel L Jackson) seeks a more planned approach which includes using the hostages as bargaining tools. Philosophically, Smith is caught in the middle, believing that some of the prisoners’ grievances are justified, and he plays by the rules of neither side.

In the real rebellion, 40 guards and civilians were held hostage by the 1300 rioting prisoners.  When, after 4 days, tear gas was dropped into the yard and up to 1500 State Police and troopers stormed the place and opened fire, 29 prisoners were killed, as were 10 guards.  One guard died from head injuries inflicted by the prisoners, and four prisoners were executed by fellow inmates.  The film takes an unconventional approach to unpicking a prison riot, and (other than the odd mawkish moment – as when Smith and Jamaal make a pact as the firing starts) it works. 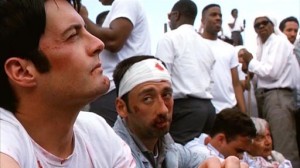