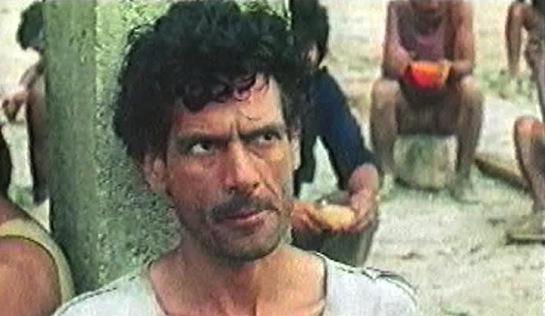 This is quite a fascinating film, as much for the caution with which it treats (or rather side-steps) the churning political turmoil which serves as a constant backdrop to the action, as the main story of a prison escapee being pulled in several different directions.

Alias ‘La Gringa’ was produced not  so long after the Peruvian military quelled riots in three prisons, resulting in over 224 prisoners being killed. Many of the dead had been executed extra-judicially. The riots had been orchestrated by members of the Maoist Sendero Luminoso (‘Shining Path’), who sought to embarrass the Government ahead of a major international conference, while at the same time demanding the release of 500 Shining Path prisoners. The terrorists began rioting at the three prisons – the Lurigancho Prison, the Santa Mónica prison for women, and at El Frontón, in Callao, not far from Lima – simultaneously on 18 June 1986.

The true number of casualties seems uncertain, but it appears that after the Navy was called in to put a swift end to the riot in El Frontón, between 122 and 138 died in that prison alone; the dead included three military personnel and one hostage. Of the prisoners who died, it was alleged that up to 118 were summarily executed after surrendering.

Much of the action in Alias ‘La Gringa’ takes place on the rocky island prison of El Frontón, with common criminals kept apart from the political terrorists. Our hero is the charismatic Jorge Venegas (Germán González), who has previously escaped three times from the prison, and who has earned the nickname ‘La Gringa’ (the sometimes-affectionate, sometimes-less-affectionate term for a European woman) as a result of having escaped on one occasion while dressed as a white ‘drug pusher’s woman’ – on the basis that the authorities would never suspect a gringo, let alone a gringa. The Venegas character is based on a real ‘La Gringa’ – Guillermo Portugal Delgado – but the slightly whimsical tone his nickname lends to the film’s title remains distinctly at odds with the gravity of that which is to come.

We first meet La Gringa while he is escaping under gunfire. His time at large is short-lived. When he is returned to El Frontón after a single night in the arms of his girl, Julia (Elsa Olivero), he is thrown into a rat-infested cave to deter him from further escape bids. There he meets an academic, Professor Oscar Montes (Orlando Sacha), who has been charged with terrorism offences but insists that he is innocent.

There is a bit of tension around the place. For starters, the prison Warden is fearful that if La Gringa escapes again it will spell the end of his career, and so he plots – with Loco Luna (Juan Manuel Ochoa), a prisoner who believes that he was betrayed by La Gringa in that most recent escape – to have him killed. Montes, too, is under pressure after disassociating himself from the other terrorists; he is in danger of being disposed of by them as a traitor to the cause. And of course there is the constant agitation of the terrorists, who don’t entirely accept the legitimacy of their imprisonment.

But once La Gringa and Montes are both released from the cave, and we get to see the normal prison regime, it seems surprisingly relaxed. The prisoners are apparently bound only by the limits of the island; they are free to go down to the shoreline, unsupervised, and fish… and it is there that Montes thwarts an attempt by Loco Luna to kill La Gringa. The men already had a bond, borne of their shared time in the cave and their interest in writing… but this cements it.

La Gringa duly escapes a fourth time, from a boat taking prisoners to court on the mainland. He is put up by Julia in a safe house while she arranges the false papers that will allow them to set up a new life in Guayaquil, Ecuador. He passes the time idly watching an armoured car unload in the street below, and is hugely tempted – but knows that Julia is opposed to him doing one last job.

Just before leaving for Ecuador, he reads a letter from Montes that he had been asked to smuggle out. Although it’s not addressed to him, he learns that the Professor had wanted to escape with him, but had lacked the courage to ask. So, instead of heading off to Guayaquil, as he’d promised Julia, he catches a visitors’ boat back to El Frontón, and hands himself in – intending to escape again, to repay a debt, this time with Montes in tow.

But then the riot erupts, and the Navy is called in, and the Professor – waving a white flag, to the disgust of his fellow terrorists – is gunned down. As we know, it is just the start.

We see La Gringa swimming off the island some time later; escape #5. It’s a long way to swim. A voice-over lets us know that he makes it to Guayaquil, from where he would be able to write a true account of what transpired.

In time, Peruvian filmmakers may well make films that more critically examine the riots and the Government’s armed response to them – in the same way that US filmmakers have raked over the coals of Attica. Maybe they have, already. This film is much safer version of the riots; one which makes them almost incidental to the main action… but which at the same time gently prods and urges Peruvians to learn lessons, have compassion, accept social responsibility and set some of the past political differences aside.

It’s probably more interesting for all that it doesn’t say. 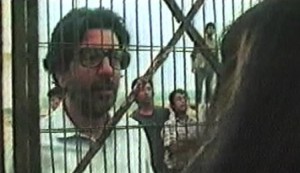 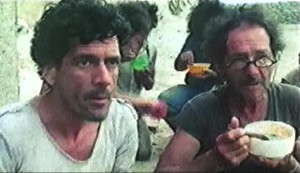