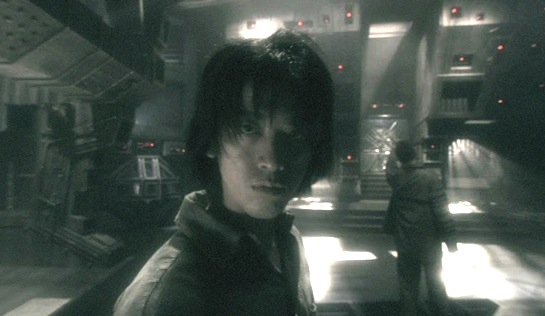 What you do, apparently, if you have a woman who has inherited a particularly nasty isomer from her father that is eating away at her humanity, is find two condemned men and pit them against each other in the hope that the isomer will attach itself to the one who most wants to kill the other. That’s the gist of things here.

Prisoner Tenshu Yashiro (Hideo Sukaki) has killed six men involved in the rape of his girlfriend Misako, and it looks as though he might have then killed her as well. He is strapped into the electric chair but survives the execution. “You couldn’t kill anyone with a voltage that weak,” he observes, a touch suspicious. The warden duly offers him a choice: be re-electrocuted at a higher voltage, or be declared ‘officially dead’ but live on in circumstances that might be considerably worse than death. He chooses the latter.

He is taken to a modern high-security facility which looks like a very spacious tomb, all grey concrete and steel with no natural light, and random jets of smoke for added atmosphere. There he finds another man, Atsushi Gondoh (Tak Sakeguchi), all-round psychopath, linked to nine murders of women (he boasts of even more) who were raped after being killed. He, too, has survived an inept execution attempt, and was offered the same deal.

A disembodied voice from somewhere in the facility offers them food and wine… but its owner soon turns the heat up to 100° and sounds an alarm every 30 minutes to disturb their sleep. The voice belongs to one of a team of researchers watching the two men’s every move – and hoping that one will develop such murderous intent that the isomer (or demonic taint or alien parasite or whatever it is), will be coaxed out of the body it currently inhabits – that of a young woman, Yurika (Ryô) whose sister Asuka (Koyuki) is one of the researchers – lured by the attraction of residing in a stronger, more bloodthirsty host. The men are simply isomer bait.

All pretty straightforward, really – just a different sort of exorcism – until a team from National Security Council waltz into the place undetected (so much for the high-security facility) and take over. Their boss, Mr Tokutake (Jun Kunimura), is understandably impatient for the isomer transfer to be shown to be possible because he is keen to harness its power for military purposes.

In true action manga tradition (the film is based on a manga by Tsutomu Takahashi), lots of fights follow: Yashiro and Gondoh, Yurika and Gondoh, Tokutake’s men and the researchers (not much of a contest, really), and Yashiro and the whole National Security SWAT team, who provide some light relief by continuing to train and fire their automatic weapons at him (after the isomer has inhabited him), despite the bullets having no impact on him whatsoever. There are gun fights, lots of kung fu-type variations, and more than enough one-sided fights where one party has a gun and the other doesn’t. It’s hard to be invested in who survives, who doesn’t, whose humanity is eroded away by the isomer, and whose isn’t.

This is quite a tedious film; slow, long, uninteresting and so visually murky that it is a strain to watch. But for all its disturbing isomers, the thing I’m most troubled by is the standard of ethical practice by the Japanese scientific fraternity in allowing a woman with such a personal stake in the experiment to be part of the research team. 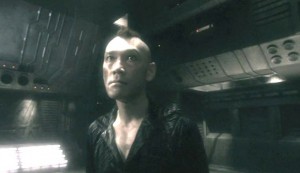 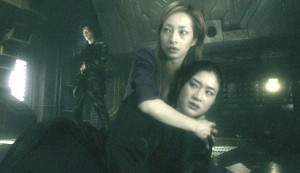 Note: Tokutake is listed as ‘Kojima’ in some cast lists and Gondoh regularly appears as ‘Zeros’.