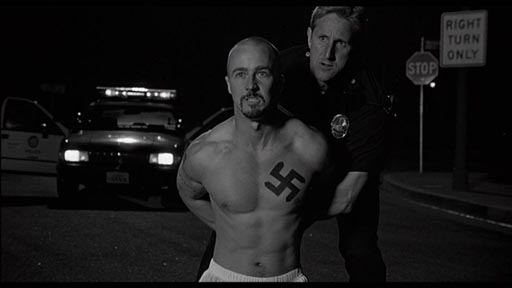 While one of the dramatic turning points occurs in a prison, most of this movie occurs outside.  Derek Vinyard (Edward Norton) becomes a white supremacist pin-up boy after his father is murdered by black youths, and when his car is broken into by some young blacks who he kicked off the local basketball court (in a winner-owns-the-court game), he kills two of them.

Sentenced to 3 years jail, he learns that his fellow neo-Nazi mates are prepared to make deals with the Hispanics if it’s to their advantage, and he isolates himself from the group on account of their hypocrisy. This doesn’t end well, with his former White Power allies raping him in the shower.  All this time he works in the laundry one-out with an African American who is serving 6 years for dropping a stolen TV on a Police officer’s foot, and realises that his demonisation of blacks was misplaced.

Do the US prison authorities really place a white skinhead convicted of a hate-crime and who brandishes a large swastika tattoo on his chest alone and unsupervised with a young black prisoner?  And would that young prisoner have enough influence to keep all the African American prisoners from attacking a white supremacist?  Both seem unlikely.  Nonetheless, Derek survives and changes, and when he’s released he has to dissuade his impressionable younger brother Danny (Edward Furlong) from following in his footsteps.

Well written and with a powerful performance from Norton in particular. 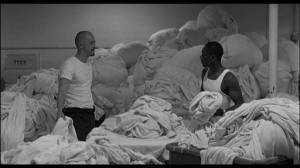 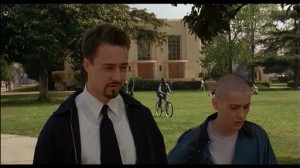