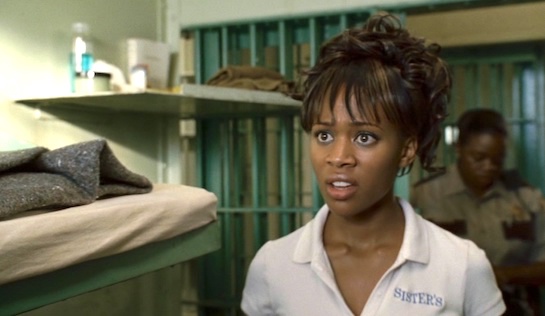 By some coincidence, when I watched this I was midway through reading Shane Bauer’s American Prison: A Reporter’s Undercover Journey into the Business of Punishment, which examines (amongst many other things) the history of commercial interests in the US driving the incarceration of African Americans.

Bauer takes us back to the abolition of slavery, and the states’ sudden interest in using a prisoner workforce to reduce the costs of imprisonment; the seeds of private prisons. “Like prison systems throughout the South, Texas’s grew directly out of slavery. After the Civil war the state’s economy was in disarray, and cotton and sugar planters suddenly found themselves without hands they could force to work. Fortunately for them, the Thirteenth Amendment, which abolished slavery, left a loophole. It said that “neither slavery nor involuntary servitude” shall exist in the United States “except as punishment for a crime.” As long as black men were convicted of crimes, Texas could lease all of its prisoners to private cotton and sugar plantations and companies running lumber camps and coal mines, and building railroads. It did this for five decades after the abolition of slavery, but the state eventually became jealous of the revenue private companies and planters were earning from its prisoners. So, between 1899 and 1918, the state bought ten plantations of its own and began running them as prisons. Forced labor was undeniably productive. An enslaved person in an antebellum cotton field picked around 75 percent more cotton than a free farmer… The reason is simple: People work harder when driven by torture.”

American Violet takes us again to Texas and is a companion piece to Bauer’s narrative; a story of racism and commercial incentives driving high arrest rates of African Americans.

The film is based on the true story of Regina Kelly, an innocent African American who was arrested in a drug sweep in Hearne, Texas in 2000, and who ultimately – through the American Civil Liberties Union (ACLU) – sued the District Attorney, John Paschall. The case was settled before trial; Paschall was later voted out of office (but not for some years), and then in 2016 pleaded guilty to an unrelated felony charge of misusing money that belonged to an estate for which he served as executor, and had to himself spend 30 nights in jail.

Nicole Beharie here plays the Regina Kelly character, Dee Roberts; a feisty, hard-working 24-year-old single mother of four young girls aged between 2 and 8, who is one of 15-odd African Americans arrested in the small town of Melody, Texas, on the uncorroborated evidence to a grand jury of a single informant. The informant is later revealed to be suffering from a mental illness and to have been intimidated by the DA to provide names of 20 drug dealers or face a lengthy term inside. Dee is charged with distributing narcotics in a school zone.

She is quickly offered a deal: 10 years probation for pleading guilty – or else wait in jail for months until a trial date, and if convicted run the risk of 16-25 years in prison. She refuses to plead guilty for something she hasn’t done; others are not so strong. Aside from it being a matter of principle, she knows that as a convicted felon she loses access to her public housing and other social service benefits.

She spends 21 days in jail until her bail is reduced and she can return to her children, who have been entrusted to her wonderful god-fearing mother, Alma (Alfre Woodard), who has to battle the father of Dee’s two younger girls, Darrell (Xzibit), for custody.

The ACLU gets involved, and lawyers David Cohen (Tim Blake Nelson) and Byron Hill (Malcolm Barrett) co-opt local attorney and ex-cop Sam Conroy (Will Patton) – who has his own battles about whether to take on the DA, the Police and some good friends in his own town – to prove that the DA’s drug sweeps were racially motivated. Cohen explains the link between commerce and the activities of the drug task forces: “Drug laws selectively target people of color. Meanwhile, Federal money goes to the counties that convict the most people, and plea bargains are aggressively pushed to hasten those convictions.” 95% of convictions, he notes, are settled by way of plea bargains, and “for most people the penalties of not taking the plea are so frightening that even if they’re innocent, they plead guilty.” Dee is used as the person who has to go up against the all-powerful DA.

We know the outcome, of course. Her charges (and those of others who haven’t already accepted a plea bargain) are dropped when the informant is exposed in court as very unreliable – although the DA, Calvin Beckett (Michael O’Keefe), resolutely tells anyone who will listen that the accused are still all guilty, even if it can’t be proven. And Beckett is exposed as a racist, and the case is settled with some good outcomes for people of color.

For all of its predictability, it is a very watchable movie; beautifully acted, and there is hardly a film where seeing the battler win and the bad guy get his comeuppance is not enjoyable. Furthermore, its message about the nexus between racism, profit and mass incarceration of the impoverished is compelling.

But let’s be clear: although you will find this in the odd prison movie list, it is far from being a prison movie. 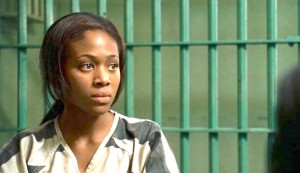 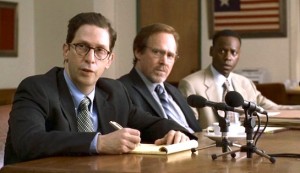 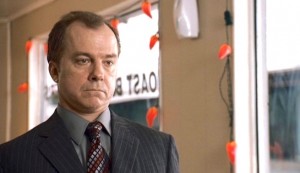 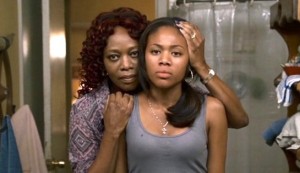