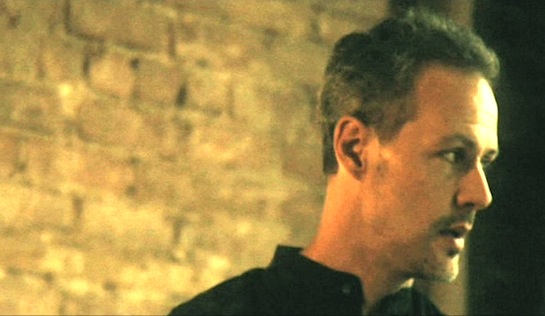 Welcome to Necrosis 6, a penitentiary planet incorporating the first ‘pharma-prison’. The planet has eight suns, we’re told, which ensures that it never gets dark (and is the reason, presumably, why much of the film was shot using an irritating yellow filter).

Now, it seems that astronomers have found three-star constellations are at least 340 light years from Earth, and none that are eight-star to my knowledge, so I think we can assume that this is a long, long time into the future. A very long time. And quite an arduous task just to get to N6, you would think. Which explains why newly received life-sentenced prisoner Elias West (Daryl Boling) looks tired when he arrives. But how glad must he be to find that (a) humans can live there without breathing apparatus, (b) buildings are made of brick (how comforting must it be to have such a time-honoured trade survive so far into the future?), and (c) despite the constant heat from those eight suns, many of the rooms have retro 20th Century oil heaters?

It’s a prison like no other. The main buildings are encircled by a force field through which it’s possible to escape, but if you get shut outside it you’re at the mercy of ravenous mutants. Each prisoner (and each marshal) has a ‘bio-tag’ implanted at the top of their spine, which can be programmed to prevent violence and control emotions, vision and everything else. For example, a prisoner who cares for a beautiful young woman, Maleyna, is programmed to see her face as carrion to prevent him from being too attracted to her. The principal activity of the prison’s Warden Galloway (Jef Betz) seems to be waiting for the implant programmer (the ‘pharmacological dispenser’) to program Maleyna’s bio-tag so that she might start to lust after him. Prisoners are allowed to drink alcohol, and do so with relish – to forget. Staff just drink.

The collected inhabitants overall are a motley bunch, their motleyness enhanced by their strange reliance on steampunk equipment. But the chief marshal, Stahl (Benjamin Jaeger-Thomas), is a unique character, I think, in prison movies. Stahl cannot speak other than with the most grandiose magniloquence: “I am Marshal Stahl,” he says in introducing himself to newcomer Athena (Kathleen Kwan), “the pre-eminent executive enforcement power on this delightful little rock you have dusted upon.” “Cub,” he says to his deputy, “if you’ve been imbibing your vile libations I will be making very innovative revisions to your anatomy.” Or to his staff generally, “Lend me your ears, my fine nimrods.”

Athena, who delivers West to Necrosis 6, turns out to be a classy shapeshifting Corvette-class android, who wants to assist West… who in turn turns out to be Jonas Cale, who 15 years earlier lost his wife and daughter, the former killing herself rather than become Warden Galloway’s plaything. In the interim, West has been a prisoner in a Zeke laboratory colony, and, we discover, being part-Zeke the implant has no effect on him. Hooray! He has also changed his appearance so that no-one other than one other prisoner recognises him; not Galloway or any of Galloway’s minions who have wronged him. And we realise that rather than being just another prisoner, he has landed on the planet with a mission of ‘slow cooked’ revenge. That is not so unique.

It’s an uneven film. The script is at times clever, with surprising twists and turns and Stahl’s florid, pompous language throughout. But it’s also hard to watch much of the time, with the sets so pathetic, some of the action so laboured and the yellow filter so unrelentingly annoying. And it does a lot of meandering before you realise that it could be a thriller. Different, though.

The film is also known as Solar Vengeance and Interstellar Outlaws