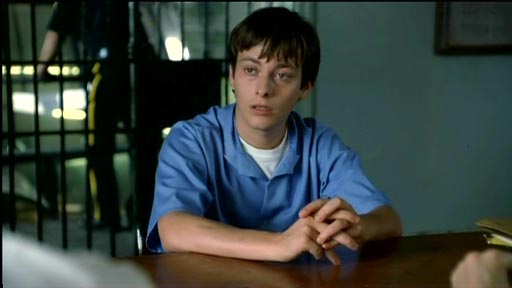 Written by Edward Bunker (who did 20-odd years in prison himself) and shot partly in Philadelphia’s closed Holmesburg Prison and several working prisons (substituting for San Quentin, where the film is set), this film about survival in prison should at least have some authenticity.  And it does – to a degree.

It tells the story of first-timer Ron Decker (Edward Furlong), a very young-looking middle-class kid, who finds himself in jail for selling dope, and who is soon taken under the wing of a long-time prisoner, Earl Copen (Willem Dafoe), who stops him from being bashed and raped, gets him cushy jobs and asks nothing in return. Furlong wanders round the movie looking like he’s Edward J Fox who has landed in the wrong film, and why Dafoe’s hardened character would befriend a young, frightened, white-bread kid and expose himself in the way he does is never fully explained.

There are stabbings and deaths aplenty just to remind you how unpleasant prison is, but on the other hand there are complicit or crooked guards and prisoners working as clerks in key areas who between them can arrange almost anything to make life more comfortable. Copen, for example, is known by the senior staff to be a bad influence, a mover and shaker (and he himself claims to ‘run the jail’), but he is still allowed to write incident reports and essays for his prison guard bosses… I wouldn’t say that it couldn’t happen (we had prisoner ‘writers’ not so long ago ourselves), but it does challenge one’s capacity to suspend disbelief.

Dafoe does a good job with the script he has to work with, and Mickey Rourke (as Decker’s first cellmate) plays an excellent transvestite, but ultimately the there are too many unexplained motivations and improbable dimensions to the relationship between the vulnerable kid and the hardened con to make the film work. 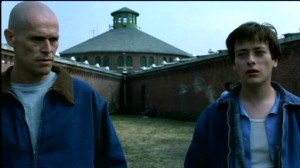 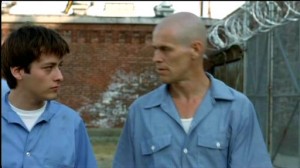