Somehow, this film slipped past the gatekeeper. But if I ever wanted to remind myself why I avoid exploitative Women in Prison movies, this would do the trick.

Filmed in the Philippines (where else?) and dubbed into English, it is set in a brutal women’s prison in the jungle. (Is there any other type?) The scene is set early when a dead or half-dead prisoner is taken from ‘The Devil’s Hole’ (a tiny corrugated iron shack in the sun) and given 20 lashes, seemingly to make sure she’s dead. And that she dies with her breasts exposed.

The bad guys are the sadistic prison Director (Odette Khan); her boss, the corrupt, lascivious regional Governor (Jim Gaines), who selects prisoners to work in his many whorehouses; the intense, unsmiling Juana Yanson (Vanessa Bolabas), the prison’s chief officer; and prisoner Valery (Xeah Atillano), a smirking snitch who gets paid in drugs for the information she openly provides to staff.

In the red corner, the good guys (the prisoners) are headed by Jennifer Estrada (Yvette Yzon), newly arrived bad girl and, well, include no-one else of much interest. One suspects that you are supposed to be particularly sympathetic to the only Caucasian prisoners, pimp-killer Carol (Amelie Pontailler) and Monica (Dyane Craystan), but it’s not easy.

The plot, if you can find it amongst the gratuitous sexual violence and nudity, involves the women, led by Jennifer, escaping from a party outside the prison where they have been entertaining lots of slobbering men. The Governor has however been tipped off that they might attempt to escape, and has organised a hunt party to assemble as soon as they sneak away. Some of the party cover themselves in war paint; others slaver and carry on like gluttonous pantomime pirates. Armed to the teeth, they hunt down the women in the jungle, and when they catch them, subject them to unspeakable atrocities.

Jennifer, however, avoids capture and returns – in a prison Director’s uniform, no less – with serious-looking people who arrest the prison Director and take her into custody; their timely intervention saving Monica from the gallows.

Is there anything to commend it? No. Though it does boast quite a novel punishment ‘cell’ – a half-submerged bamboo cage into which Monica is forced, along with water rats and the decomposing body of a prisoner who preceded her. It is suspected that the cell complies with neither the Mandela Rules nor the International Convention Against Sharing Small Spaces with Putrefying Criminal Associates.

I think this was director Bruno Mattei’s last film, or almost his last. Thank goodness, is all I can say. 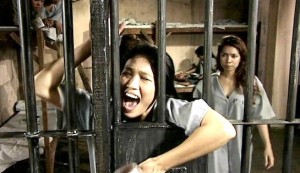 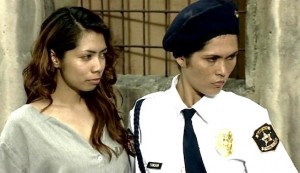 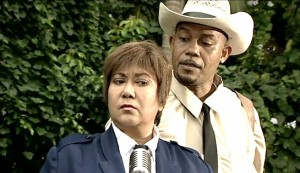 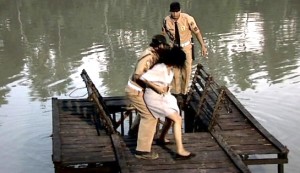 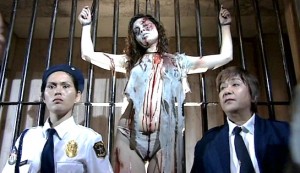 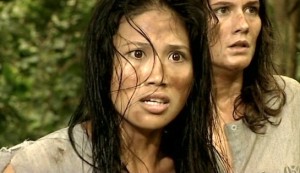