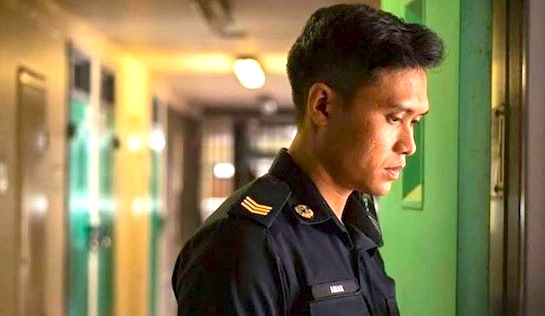 Aiman (Firdaus Rahman) is a prison officer. He is in his late twenties and lives with his older sister, Suhaila (Mastura Ahmad), in a modest flat. He doesn’t approve of her Australian boyfriend, and she doesn’t approve of his job. And she has good reason; their father was convicted of a gruesome murder committed before Aiman was even born, and then hanged. All those years on, it’s still raw.

And Aiman appears intent on making it harder for them both. He has joined the Malaysian prison service from the regular army, and transfers after two years to the (fictitious) Larangan Prison (filmed, in part, at the old Maitland and Parramatta Gaols in New South Wales) – where his father was executed. His job is in the workshops, but he is drawn to the gallows, and to the chief executioner of 30 years, Rahim (Wan Hanafi Su), by a mixture of curiosity, morbid fascination and a desire to prove to himself that he is nothing like his father.

Rahim takes him under his wing. They bond on a trip to buy some new rope; Rahim likes the young man’s knockabout past and unease with his rule-driven colleagues. Aiman doesn’t let on that he is the son of one of Rahim’s many victims. And when Rahim’s assistant decides that he hasn’t the stomach to pull the lever and relinquishes the role, Rahim turns to Aiman to become his next apprentice. It’s an awkward offer; Aiman can no longer flirt with the job – feed his intrigue while staying at arm’s length. It’s not a call that can be easily made.

Aiman is a quiet man, a little unknowable, and the film is not dissimilar; there is much said in its silences, its routines, in the secrets of the past. Everyone is carrying pain.

How each one deals with that pain is different. Aiman finds Rahim’s disingenuous patter to those he is about to kill offensive, but when he needs to lead the next condemned man through the process on his own, he can find no words at all. Of course, words are not needed as you pass the twin boys of the same man in a candlelit vigil, or watch the men on Death Row bury their faces in the clothes in which their families have chosen for them to die, or see their legs collapse beneath them as they are led to the noose.

It is a film that asks questions. It questions the humanity of officially sanctioned murder. It hints at sad, uncomfortable motives for the way many aspects of our lives play out. It asks how those whose job it is to execute others can subjugate their emotions. And it poses still more questions when they fail to do so.

This is not the first movie to examine the complex intersection of the private and professional lives of executioners; Night Train (2007) and Pierrepoint – the Last Hangman (2005) both spring readily to mind. It’s not unlike Night Train in many ways – in the loneliness and quiet desperation in its characters, if nothing else.

If it’s possible to accept that a young man whose father was executed might become a prison officer, and might then seek out this father’s executioner, if not the role itself, then this is an easy film to like; well acted, well paced, careful in the portraits that it draws. And sad, on so many levels.