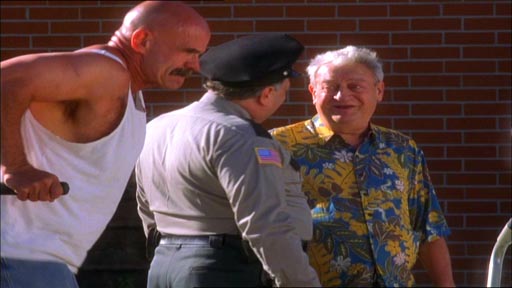 Dangerfield plays Warden Jake Puloski, the man in charge of a small privately-run prison. It’s not your traditional movie prison; staff and inmates are best buddies, one of the guards is just over a metre tall, and Jake wears loud shirts and trades jokes with the prisoners. But the prison is poorly equipped and maintained, and when Jake’s plea for more funds is knocked back by the owner and he is told that his contract finishes in two months, Jake organises four of his prisoners to ‘escape’ and rob a department store run by the same owner. Things don’t go quite as planned, surprisingly, and to keep you amused there are a couple of sophisticated sub-plots involving an heiress with whose company the prison owner wishes to merge (played with an excruciating British accent by Kirstie Alley) who finds everything about prison terribly erotic, and the local sheriff who becomes romantically entangled with a prisoner after seeing his genitalia.

What sets it apart from your garden-variety US prison comedy is that its humour it doesn’t rely on any of (a) the newcomer’s fear of prison, (b) a ‘Bubba’ character and the viewer’s fear of prison rape, (c) mean or brutal prison guards, or (d) strip searching. Ultimately there are a few funnyish moments, but so many better things to do with 90 minutes.