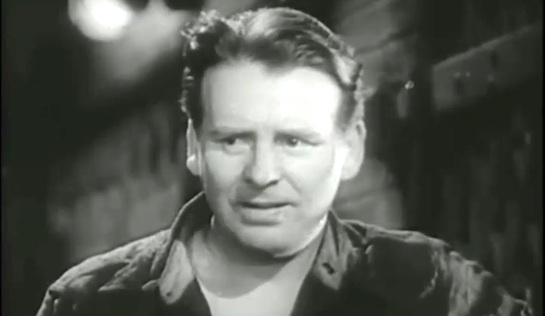 There’s not much screen time devoted to prison in Back Door to Heaven, but prison forms a large part of the miserable life of its antihero, Frankie Rogers (Jimmy Lyndon and Wallace Ford as child and adult respectively).

Frankie is a decent kid from the wrong side of the tracks. He comes from a poor family with a father who is abusive and violent when drunk, which is often. At his elementary school graduation day he and his fellow students are asked to show off their special talents; he has none except the harmonica, and breaks into a shop to steal one (also helping himself to $7.80 from the till) to avoid the embarrassment of bringing nothing to the table. He gets caught, goes to juvenile detention (having already had probation), and the die is cast; he can never shake off his past.

After graduating to prison he progresses effortlessly from County Jail to State Penitentiary on copping 5 years for slugging a trusty who was bullying a young, sick colleague. When he gets out, on the same day as two close associates, Bert ‘Mouse’ Gatto (Bert Frohman) and Jud Mason (Stuart Erwin), he is so institutionalised he appears clinically depressed. All three struggle to get back into life on the outside, but Frankie does try. A bit. He catches up with his childhood sweetheart, Carol Evans (Patricia Ellis), who is a struggling nightclub singer. And then with the odious Charley Smith (Bruce Evans), the only one of his classmates to have really prospered, who was very good with numbers as a child and is now the town’s bank manager.

Frankie comes home one day to find that Mouse and Jud, with whom he is sharing lodgings, have taken a gun and headed off to do a hold-up. He catches a cab to try and stop them, but arrives just as shots are fired and a shopkeeper is dead. All three jailbirds get charged, and Frankie is found guilty – not just of being part of the robbery, but having been nominated as the one who fired the gun (just how is not made clear). He gets the death penalty, as do the others, and is more pleased with the eloquence of his old schoolfriend John (Van Heflin) in his defence, than troubled by the verdict, which he accepts fatalistically.

On the night before his execution, Frankie magically breaks out of prison (just how is not seen to be important enough to detail), and makes his way to his old school, where Charley has arranged a reunion of the Class of 1923 as a bit of a public relations stunt before he knocks down the old school and redevelops the land. Carol and John are there, as is Miss Williams, their old teacher, and Carol has just delivered a stinging attack against Charley (and everyone else, herself included) for allowing Frankie to become what he has become. Frankie drops in, exchanges pleasantries, bids them farewell, and is duly shot by police. Oh dear.

Frankie’s fate (representative of a lot of Frankies, at least in winding up in jail, not so much in getting shot by police) is sad and inevitable, and we are asked to see it as our collective responsibility. Should we not all be doing more to help the Frankies among us?

We might be more inclined to ruminate on this, or even act on it, if we were not distracted by the film’s curious casting. It can only be about 15 years since the Class of 1923 (which puts all the class at no more than 27, by my calculation), but Ford is in his 40s and Ellis, who plays his same-age sweetheart, is 22. Life in jail has clearly not treated Frankie well; one can pretty much understand why he opts out of it.