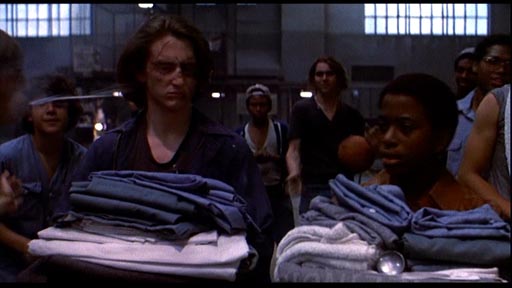 23 year old Sean Penn plays a Chicago schoolboy Mick O’Brien, who has a long rap sheet and ultimately gets sent to a juvenile institution for driving his car into (and killing) the 8-year-old brother of his arch enemy in the schoolyard, Paco Moreno.  At the time, he was being pursued by Police from the scene of a crime where he and a mate were all balaclava’d up, ready to rip off Paco’s gang’s drug stash, before another gang started shooting and people got killed.  You get the picture; they’re young, but bad dudes.

Mick goes into a youth detention centre that, despite well meaning staff, is arguably as chaotic as anything you’ll see in film.  On reception into the dorm, with the one staff member usually retreating behind a wire cage, the new receptions are clapped and spat on by every other inmate.  While everyone’s in two-out cells, only in the management section are the prisoners locked in.  The ‘barn bosses’ (ie the inmates’ top dogs) allocate the jobs, run the rackets, hand out the letters and rape the young boys.  It’s extraordinary to say the least that there are some official duties attached to the role (eg the job allocation), and even more extraordinary that under those circumstances the staff are happy to let the role be won by whoever is the most violent.  Anyway, Mick duly belts the two top dogs and by virtue of doing so, like Carlin in Scum, becomes the barn boss himself.  The vanquished duo stay in the same dorm and just seem to cop this, or (at least initially) don’t seem to see the need to respond in a like manner to being overthrown by force.

Meanwhile, on the outside, Paco rapes Mick’s girlfriend to avenge his brother’s death and himself gets sent to the very same juvenile centre.  Mick escapes to comfort his girlfriend and after immediate recapture is taken via an adult prison to be scared straight (a “this is where you’ll end up” lesson).  The prison (the Statesville Adult Correctional Facility, apparently) is big and imposing but reassuringly orderly by comparison; it looks far cleaner and safer than where he’s come from.  Upon his return, he has to face Paco who he knows is out to get him, but he only has months to go, and has had a glimpse at his future in adult prison… Will the bad boy turn good?  Although they know of the enmity that exists between the two boys, the authorities don’t seek to keep them apart and simply warn them to ‘cool it’ (until they can arrange a transfer for Paco).  The other prisoners take bets on who will kill who first, and inevitably there’s a big finish.

There’s tension, yes, but it all seems a bit unlikely.  It isn’t helped, mind you, by some of the least realistic cuts and bruises makeup in film history, clearly applied by the same people who paint kids’ faces before football games.