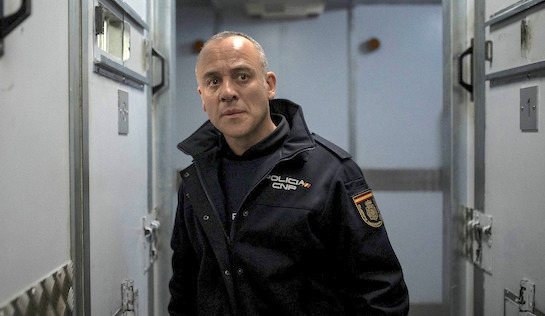 When I think of prison escort vehicles being ambushed in prison movies, I ready myself for two escaping prisoners who don’t like each other (but who are handcuffed together) to start bickering as they attempt to run in different directions. This Netflix film, thank goodness, has none of that… and, for an action-thriller, of sorts, wonderfully manages to defy the predictability of its ending until its ending.  It’s a little different on a number of fronts.

I’m not sure why the escorting of prisoners falls to Spain’s Policía Nacional rather than the Guardia Civil, but it does. The National Police are called upon to transfer six prisoners from a prison at Soria, north-east of Madrid, to Cuenca, a five-hour, 400km trip by their chosen, almost-backroads route, not allowing for fog and snow. One of the prisoners on the escort, a Romanian crime lord, Mihai Lungo (Florin Opritescu), seems to warrant special high security precautions; the others, not so much. But it’s decided to conduct the escort at night to reduce the predictability of the escort, and the prisoners themselves aren’t told that they are being moved until hours before. Yet they are allowed back to their cells to pack up, which seems to give them the opportunity to contact people on the outside, to secrete contraband, and alert potential ambushers. One one hand, it’s such a high security job that the escorting police (two in the truck and two in a car in front) aren’t allowed to carry cell phones, and the prisoners are all secured in individual compartments… and on the other, those compartment doors are bolted but not locked. Go figure.

The two police officers in the truck are compulsorily chalk and cheese. Martín Salas (Javier Gutiérrez) is on his first shift in the region. He is calm, decent, and a stickler for proper procedure. We also see him as a father, which you know means that he is either a good person, or in dire trouble, or both. His partner for the trip, Montesinos (Isak Férriz), wears an earring, is a hothead, enjoys ruffling the prisoners’ feathers, and is happy to bend the rules a bit. You get the picture. Martín drives the truck, while his partner is locked into a rear compartment to keep an eye on the prisoners.

And the prisoners are a mixed bag. Ramis (Luis Callejo) has secreted a key, so is presumably some sort of risk. Mihai seems to expect to be sprung. The others – drug user Golum (Andrés Gertrúdix), Rei (Édgar Vittorino), a financially corrupt ex-politician, Pardo (Miquel Gelabert), and young Nano (Patrick Criado) – seem more run-of-the-mill. When Ramis asks to go to the toilet, Montesinos lets him out of his compartment and guides him to the toilet, even though he could be easily assaulted, or Ramis could slide open the bolts on the others’ doors, even with his handcuffs on. Curious indeed.

They have not gone too far when Martín loses visual contact in the thick night fog with the escort vehicle in front. And then his vehicle hits some spikes rolled across the road. Oh-oh. But the nature of the ambush, if it is an ambush, is not clear. Montesinos investigates, and is shot. The two in the forward vehicle are decidedly already dead. The shooter has the two-way radio. Martín is alone with the prisoners, and a shooter. A cell phone would sort of come in handy, if he had one. It’s freezing. It’s nighttime. There is no passing traffic.

The shooter (Karra Elejalde) is clear in his demands. He wants just one of the prisoners; Martín is not prepared to give him up, or the key that would allow the shooter entry into the van. It doesn’t go well. The shooter wants this prisoner badly, and is clearly not too worried if others get in the way of him getting access to him. It takes a while to play out.

At its best, this is taut drama with some unpredictable shifts and, as I said before, an outcome that is not known at the time that the opening credits roll. And its setting is powerfully evocative: a big, open expanse in which the action contracts down to one smallish van with a few players, all hemmed in by the sheer, crushing iciness outside.

“I’ve tried to do as little damage as possible,” says the shooter late in the piece, in his own defence. “Well, maybe if you’d been a little patient and waited until your one prisoner got released, maybe those others wouldn’t have met grisly ends,” says no-one. There are lots of things about this movie that make little sense, but the drama and tension are real enough. 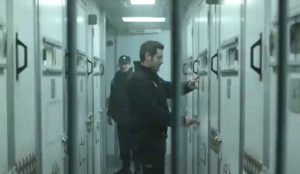 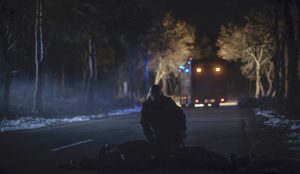 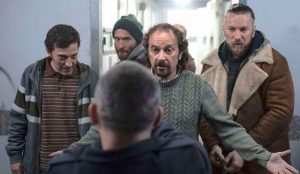 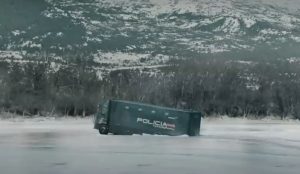