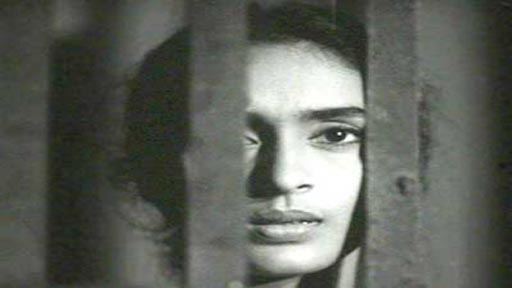 A Hindi classic, apparently, but not quite a prison movie classic. Mind you, the Naini, Yeravada and Bhagalpur Central Jails all appear in the credits, so one would hope that the prison scenes have a degree of authenticity about them.

I can’t say that the prison scenes are exactly representative of Indian prisons in 1934, the year in which it apparently set (well before India became independent in 1947, anyhow), but there are 20-odd women in this spacious and orderly female wing. Amongst the prisoners is Kalyani, (Nutan), a beautiful, serene woman, serving 8 years for murder. We soon see how selfless she is, volunteering to put her own health at peril by nursing an old woman who has TB. In the hospital ward, the good-looking young doctor Devendra falls in love with her, but Kalyani can’t allow him to put his own reputation at risk, so resists his overtures and he resigns his prison post, heartbroken. We then get a long flashback. Her mother is dead. Her brother dies in some humanitarian pursuit. She meets and falls in love with Bikash, a wanted freedom fighter, and at one point innocently shelters him to assist him. Bad move. Bikash is taken away by Police. The other villages gossip about the unmarried relationship and insult Kalyani’s postmaster father, so Kalyani protects him by running away from the village. She takes up work as a nurse to a rude and demanding woman, only to find that she is married to… Bikash! Her father goes looking for her, but has an accident on the way and dies, and to top off a really bad day, Kalyani, head spinning, poisons Bikash’s wife, killing her. Hence prison.

But in the present, everyone admires her guilt-driven good works in prison and petition a Board to let her out early. In a remarkable and impressive example of planning for an inmate’s return to the community, the prison authorities secure not only her release, but also the approval of Dr Devendra’s mother to having a killer as a daughter-in-law. They also buy all her rail tickets. She is accompanied to the train that will take her to meet her doctor, but while waiting at the docks Kalyani bumps into the dying Bikash, learns that he’d been true to her all along and had been forced to marry the harridan for The Cause, and she abandons her doctor’s wife dream and runs off with her consumptive, malarial freedom fighter instead. Gorgeous.

I’d always imagined 1930s Indian prisons to be poor and overcrowded, but this was under British Rule and so everyone is clean and well dressed, there is good medical care (including daily visits from the doctor, if necessary), and the prisoners are all well fed and looked after, it seems. That doesn’t prevent some healthy jealousies emerging, and a bit of a fight, or some cynical, gossipy staff and a rumble in the next-door male prison.

Not quite sure that I believe it all – the prison scenes or the goody-two-shoes murderer. 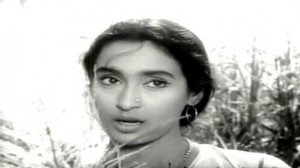