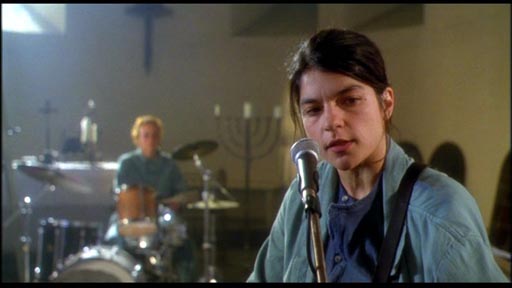 I know it doesn’t pretend to represent real life, but as a prison movie it’s hard to take at all seriously from the point at which the newly-arrived prisoner is given a pat down search while naked. What does one hope to find by running one’s hands over a bare armpit, one wonders? They obviously do lots of things differently in Germany.

Anyway, four women prisoners who have formed a rock group are invited to play at a Police ball, of all things, and as the women leave the prison there are calls to them to ‘bring us back a good looking cop’. The relationship between criminals and Police is clearly better there than here. On the way to the ball they are accompanied in the back of the divvy van by a sleazy male prison officer who drinks from a hip flask and makes passes at the women. They attack him, escape, and then while they’re on the run a song they sent to a record company becomes a hit and they become instant celebrities. They embrace their sudden fame, taunt their pursuers, take a toy boy hostage, keep escaping impossibly when encircled by dozens of Police, and manage to wind up in picturesque locations, in new clothes, without having to worry too much that their stolen car is about to be spotted or their door is about to be kicked in.

But it’s not all fun; the stories of the women, as they slowly emerge, awkwardly reveal sadness and struggles. The bigger part of the movie is more of a romp, a wild ride, a celebration, or just an excuse to make an extended music video. Or an opportunity to make the Police look inept; my favourite is when two of the escapees jump off a very large bridge when surrounded by Police, then manage to swim quite a distance to the river bank and yet the Police are nowhere to be seen when they make it to dry land. 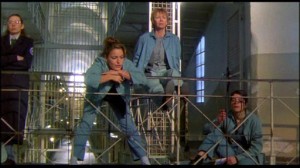