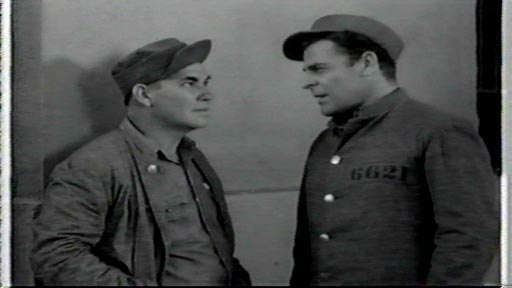 Not long ago I watched Death Warrant (1990), about an undercover cop in prison, and struggled horribly to suspend disbelief. Yes, I know that it’s not sensible to subject the credibility of any action flick’s storyline to too much scrutiny, but I struggled nonetheless. Behind Prison Gates is worse, and it’s not even a ’30s action flick, really. It too is about an undercover cop in a prison who has his cover blown, and the plot is even more ludicrous.

Judging by Behind Prison Gates, they were certainly tough, brave men in the ’30s. Or dumb. Norman Craig (Brian Donlevy) is a State agent. He and his mate are placed in prison undercover by the Attorney-General’s Department, to see if they can solve a bank robbery in which two State detectives were killed. They believe the bank job was committed by three men who are locked up for a much smaller job. One of the detectives had died in Craig’s arms. It seems not to matter that as local operational cops at the scene of the crime, the risk of them being identified as ‘state dicks’ is huge. Or that in assuming the identities of two big-time robbers shot dead by other agents, they run an even greater risk that prisoners who knew the dead men would twig that they aren’t the real deal.

Agent Craig enters prison as Red Murray. He’s been in jail for less than a month and is entitled to be a bit anxious, but he has all the lingo, all the prison knowledge, and all the tough-guy bluster and posturing of a crook who’s done 20 years. Things go well until his colleague winds up dead in his locked cell with a bullet in his head. This forces the Attorney General to come clean to the prison Warden that he has another man, Murray, on the inside, too. The Warden (Joseph Crehan) is not happy to have been kept in the dark. And he’s left with some awkward decisions to make, as Murray had just threatened to kill him during an abortive mass escape attempt (having volunteered to keep the Warden at bay during the breakout on learning that the other cons wanted to kill him).

From there the Warden meets with Murray very regularly, dragging him up from punishment cells and wherever else to speak to him privately. He cuts his punishment very short given his known role in the breakout, and later declines to keep him banged up after Murray knocks out another prisoner who is just about to expose him as a state agent. The undercover man is also conspicuously placed in a cell with one of the robbery suspects, Petey Ryan (Paul Fix) and sent to work in the print shop with another, Marty Conroy (George Lloyd). None of this, of course, would arouse any suspicion at all from wary and suspicious prisoners known for their suspiciousness.

But that’s not all! The operation is very nearly exposed when the real Red Murray’s sister Sheila (Jacqueline Wells) turns up to visit him. Murray pre-emptively whacks her. She demands to see the Warden. In the Warden’s office, the Warden and Murray tell her that her brother was shot dead, and entrust her with all the details of the undercover operation, without first ascertaining whether she might perhaps be sympathetic to the bank robbing fraternity. She takes the news of Red’s demise so calmly that they ask her whether she would act as a go-between for the man who is pretending to be her dead brother. Naturally, she agrees.

Murray does an excellent job in staying one step ahead of being exposed, and starts playing Ryan and Conroy off against each other (the third member of the gang having been killed in the escape bid) in the hope that they will implicate each other in their quest to get to the $150,000 proceeds of the robbery first, not trusting the other to divvy it up.  By the time they all manage to escape in pursuit of the loot, both Ryan and Conroy know that Murray is an undercover dick and both prepare to kill him. That he miraculously escapes should surprise no-one, and nor should it surprise that he ends up happily in the arms of the sister of the dead robber whose identity he stole. 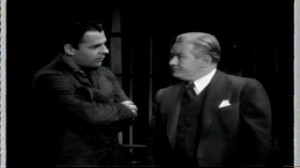 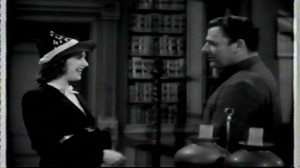