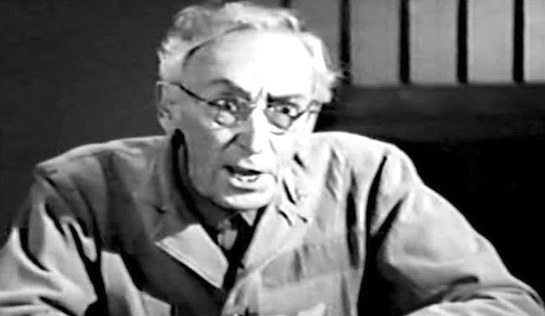 It’s wartime. ‘Steel King’ James J (‘JJ’) MacGlennon (Tully Marshall) is a cranky, old, avaricious magnate who gets 1 to 5 for withholding essential war materials, convicted on the evidence of his son, Jonathan (Alan Baxter), whom he had expected to lie on his behalf.

Jonathan is not quite his father’s son. He is a PhD, an idealist and inclined towards socialist thinking and all sorts of other thinking. He berates his father for his criminal “anti-social proclivities” and refers to him as a menace to the best interests of organized society. Jonathan is also sent to jail, but is pardoned in record time – seemingly for having told the truth at the trial. On his first day in prison he has a confrontation with his cellmate, tough-guy Frank Lucacelli (Matt Willis), who objects to his incessant chattiness… until Jon shows him a quick combination and knocks him out. Ridiculously, he later manages to interest the chastened Frank in the cross-pollination of flowers and commits to giving him a break when both are released.

Regrettably, the film is more interested in the wrangling over JJ’s business, MacGlennon Enterprises, than in how the wealthy MacGlennons contend with the realities of prison; indeed, the prison bits are very second-rate and confined to unconvincing scenes in the Warden’s office, JJ’s and Jon’s cells, the library (the only place where we see action involving more than two prisoners), and the visiting room.

In JJ’s enforced absence, first vice-president Percy Webb (Edwin Maxwell) takes over MacGlennon Enterprises and seeks to strip millions from it so that he might take control of the company in his own right, while JJ – assisted by his fiercely loyal secretary, Elinor Cantwell (Gertrude Michael) – banks on Webb’s incompetence; his own money-making strategy is to follow Webb and do exactly the opposite.

Elinor visits Jon in prison (at JJ’s request) and calls him an “over-educated, egotistical prig” and a “righteous and self-satisfied… arrogant, selfish little ingrate” which can mean only one thing: at some point she will fall in love with him.

When Jon is released, he assumes charge of the company, and seeks to hand small businessmen much of his company’s business, hoping to build his own profits by the volume of transactions with them. He has no luck, however, in interesting small businessmen in his new socially-responsible approach – due largely, Elinor tearily confesses (ahead of both confessing their love for each other), to her getting to them first and sabotaging Jon’s efforts… on JJ’s instructions, of course. JJ is hopeful that the market will see Jon as a crackpot, that the share price will fall, and that he will be able to buy up big in his own firm.

But the market gradually warms to Jon’s new approach, and a plot by Webb and his team to bump off Jon and regain control of the stockholders’ meeting is foiled when they hire a newly-released Frank Lucacelli to do the bumping off. JJ is given temporary parole in time to take charge of the meeting, publicly proclaiming himself a convert to his son’s new approach… just ahead of a Hungarian academic convincing Jon that his idealistic approach is doomed to failure and that only his father’s approach will work.

The film’s gentle treatment of the MacGlennons is a little surprising. They have both been convicted of stinting the war effort, and I would have thought that even in prison, patriotic fellow prisoners (and guards) might have given them a very hard time. Yet they are portrayed with fondness – as a father and son embodying the natural tension between an egalitarian society and one driven by the free world’s pursuit of wealth and power. None of the other prisoners seek to have the MacGlennons’ wealth and power redistributed in their direction, which is more generous of them than one might reasonably expect.

Ultimately it’s hard to tell whether this is a drama with a quiet humour running through it, or a quietly dramatic comedy. Or maybe a strange romantic comedy. Although it is largely inoffensive, it doesn’t really succeed as any of them. And did I mention that the prison bits are underwhelming?