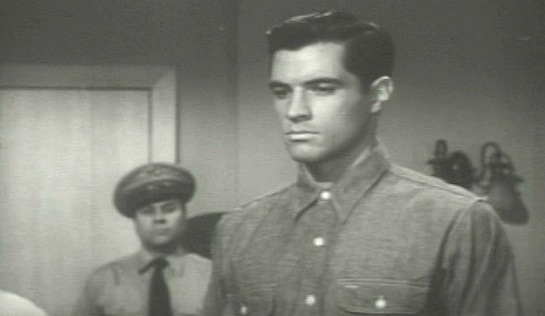 There are a few departures from the 1939 film on which this is based, The Big Guy, chief among them the deletion of the original version’s most interesting character, the insolent trustee, Dippy. But the story of a warden in an ethical dilemma of his own making still stands up.

Like Warden Bill Whitlock in The Big Guy, Frank Carmichael (Tom Tully) is seeking to make his temporary assignment to the Warden’s job a permanent one. But he doesn’t play his cards too smartly – indeed he self-sabotages – and is resigned to missing out. He tells his wheelchair-bound wife, Hilda (Sylvia Sidney), who is as conscious of the burden she believes herself to be on her husband as Whitlock’s wife is ambitious, that if he has to dust off the uniform and go back to the yard, he has to. But his disappointment is palpable.

He is called from his home back into the prison and is taken hostage in his own car by prisoners Carl Burkhardt and George Miller, who hold a gun to his head and force him to drive out the gate. They are joined by Burkhardt’s brother Roy and switch into a truck driven by a young mechanic, Johnny Hutchins (John Gavin), who has been duped into thinking he was there to show off some plans to build a new garage. With Johnny at the wheel, the escapees shoot a pursuing police motorcyclist just before Johnny loses control of the truck and it careers off the road and down a steep incline. Roy and Miller die in the crash. It suddenly becomes dark. Carmichael shoots Burkhardt as he tries to flee the scene, and as the prisoner falls dead, the case he was carrying springs open and $100,000 in payroll spoils falls out.

Who would know if he pocketed the cash? Carmichael decides to keep it all, burying it in a big piece of paper – which turns out to be Johnny’s plans and a crucial bit of evidence to his defence when he is charged with the policeman’s murder. Carmichael testifies at trial that he can’t say whether Johnny was in on the job or an unwilling participant, and a fellow prisoner William Kiley (John Larch) seals Johnny’s fate by claiming that Johnny was part of the escape plan. Johnny is convicted and sentenced to the gas chamber.

Carmichael’s dramatic tussle with the escapees is sufficient to win him the Warden’s job, but he starts to get a little troubled by his role in Johnny’s predicament and tries to make his life easier. Johnny, meanwhile, confronts Kiley, who explains that he gave his perjured testimony because he needed Johnny in prison in order to get to the 100 grand that Roy had brought along. He tells Johnny they can escape and retrieve the loot. How Kiley manages to breach the criminal code and not be treated as a snitch by the other prisoners is not clear. Anyway, Johnny runs to the Warden with this information (not the bit about the escape)… and then it gradually dawns on him that the Warden was the only person in a position to appropriate both the money and his plans from the truck wreckage. He launches an attack on Carmichael but is overpowered by guards, and is prevented from telling his story by being denied all contact with his family.

Kiley feigns illness and overpowers a guard after lock up, and the escape is on. Johnny is freed from his cell. They sneak out of the prison dressed in guards’ uniforms and go straight to the home of Johnny’s girlfriend, Anne MacGregor (Betty Lynn) and her father, who was his boss at the garage. Mr MacGregor has just stumped up $5,000 for a hot-shot lawyer to represent Johnny at his retrial, even though he thinks his daughter could do much better. Neither is overjoyed at seeing Johnny on the run.

The police soon surround the MacGregors’ house, and are joined by Warden Carmichael who, after yet another emotional, conscience-pricking conversation with his wife (who has never been comfortable about him keeping the stolen loot), publicly falls on his sword; he admits his guilt and exonerates Johnny. The vindicated Johnny surrenders, but Kiley drives the getaway car through the garage door, knocking the warden over. Oh well.

This version is a little more melodramatic (and a little less prisonny) than the original, leaning heavily on the dynamics of the relationship between the Warden and his crippled wife (who, as luck would have it, had also been hit by a car). It also inserts a few short scenes where the Warden deals with another condemned man, Morgan, letting him down gently by telling him some untruths about his wife; it adds to the moral ambiguity of his actions – on one hand compassionate, but ultimately lacking in honesty in a way that is not appreciated. Maybe he was deserving of the Warden’s job, but his lack of core integrity ultimately cost him everything.

The moral of the story is not complex: Don’t keep $100,000 that isn’t yours, even if it falls into your lap. And especially if it means someone will go to the gas chamber as a result.