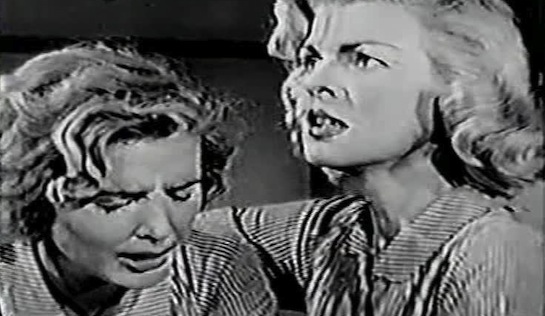 “State Prison wasn’t like any other institution in the country. It was outmoded and backdated… a sort of female Devil’s Island. A bleak prison with swamplands on all sides, smouldering with tension that festered under rules of discipline that hadn’t changed in the past hundred years. A hell hole that God and the public had forgotten.”  So says Jeff Darrow, or maybe Jeff Darrell (Tom Drake), asked by the new Governor to report on prison conditions and treatment. Notwithstanding this ridiculously overblown introduction, the Bayou Reformatory for Women seems much the same as any other movie prison with spiteful guards and a toughish regime.

The ‘betrayed women’ of the title have been betrayed to varying degrees; some not much at all. Gangster’s moll Honey Blake (Beverly Michaels) is perhaps entitled to feel a bit abandoned by her lover, Baby-face, who chose to die to in a hail of bullets rather than surrender to the Police. Kate Morrison (Carole Mathews) has taken the rap for her beau, Joe Marby, rather than have him declared a three-time-loser; an act of love he has repaid by marrying someone else. And Nora Collins (Peggy Knudsen), who committed a crime to protect her now-dead kid brother, feels let down by her defence attorney (and ex-fiancé) Darrow, who for some reason refused to perjure himself to get her off the hook.

This is classic 50s prison drama, with all the requisite ingredients – notably a prison and drama. It starts with a wonderfully severe Head Matron, Mrs Ballard (Esther Dale), who on first meeting Honey taunts her about her dead lover – supposedly to improve her manners. The aggrieved Kate is desperate to escape once she learns of Marby’s infidelity, and tricks Ballard’s dimwitted brother, Cletus, who doubles as the prison hound-keeper, to sneak her out of the prison in his car in the hope of some hanky-panky. The feisty Honey is a newcomer to prison but refuses to be bowed; she regularly clashes with the guards, culminating in her wresting a high-pressure hose from Cletus (who was using it on the recaptured Kate) and turning it instead on Mrs Ballard. There is also a whiff of a dark secret in the past of the vindictive second-in-charge, Dorothy Darcy (Sara Haden). And Mrs Ballard threatens to delay Nora’s imminent release if she doesn’t snitch on Honey.

Lest one’s capacity to handle complexity is at breaking point with all this, no other prisoner in the prison is allowed to feature in any action whatsoever.

It’s all good stuff but becomes just a little melodramatic towards the end with a second flamboyant escape bid (with Kate and Honey armed, their hostages Darrow and Ballard in tow, and Nora going along for the ride), followed by a desperate race through the swamp involving Kate, Marby and the Police to find the $50,000 Kate has stashed away at her mother’s farm, the emotional reconciliation of Darrow and Nora, a cornered Honey wrestling with whether to die fighting like Baby-face or have the courage to keep living… and several dead bodies.

All up, it is as entertaining as a bleak, festering, forgotten female prison can be.

Thanks to Melian for furnishing me with another fine fifties flick.