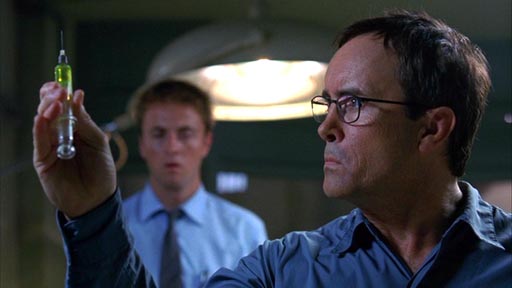 I’m not overly familiar with the horror genre, I must admit. Nor have I seen either of the two Re-animator prequels, the first of which seems to be universally regarded as the best of the three. But this, I expect, would be hard to beat as prison schlock, and you certainly don’t need to have seen the others to enjoy it. It’s in English, too, despite being made in Spain.

The film kicks off with a wonderfully half-faced zombie killing a virginal young woman, and not long after we see the cool, detached mad scientist Dr Herbert West being carted away by Police. It transpires that West has been experimenting in bringing the dead back to life, and his creation has got off a mortuary slab and has regrettably run amok. A syringe full of glowing green reagent is dropped by West as he’s being carted away and, in an extraordinary coincidence, is picked up by the young brother of the murdered woman.

Fast forward 13 years, and the boy, Howard, is starting his new job as a doctor at Arkham State Penitentiary, the very prison [filmed at the Prisión Modelo in Valencia] in which West is being held. Improbably, Howard has foregone better employment opportunities in order to work alongside West, and so eager is he that on Day 1 he brings the luminescent reagent with him. Not only that, he allows West (who has kept his hand in by experimenting on rats and through this has worked out how to capture a dying being’s soul, which he hopes to inject into dead bodies to prevent a recurrence of the previous unfortunate episode), to set up a laboratory in the prison. Luckily, they get an early opportunity to revive a prisoner who has died, and from there everything descends happily into farce, most of it involving a beautiful young reporter, Laura, whom Howard beds, and the sleazy, vicious warden, who rules the prison like a pantomime South American dictator.

There is plenty of blood and gore, much frothing at the mouth, many body parts dismembered, a prison riot in which everyone runs amok, various people being killed and brought back to life, some with the souls of others… and it’s all thoroughly good fun. 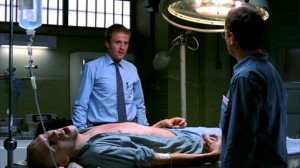