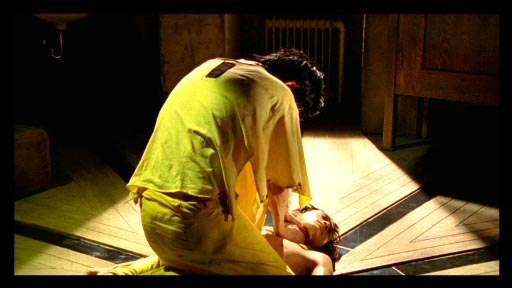 This is a simple murder mystery based in a prison, suspended in dense allusions to the past and the future, and lapsing in and out of an avant garde stage play. ‘Homoerotic’ is the word most commonly used to describe it, and the Japanese title apparently translates literally into ‘4.6 Billion Years of Love’, creating anticipation of a monumental love story, or preparing one for a passion which is a mere speck in the universe. As it turns out, it is love which ends not with a Big Bang but a whimper.

Two young men are received into prison on the same day. They are both charged with murder, and both are still wearing the whitish suits in which they committed their crimes, the team from Forensics clearly having taken the day off. Jun Ariyoshi (Ryûhei Matsuda) is a feminine youth who had been picked up in the gay bar where he worked and taken to a motel room, where he was sexually assaulted. It’s not clear why he was at all surprised by his companion’s intentions, but Ariyoshi kills the man and then mutilates the body over several hours. Shiro Kazuki (Masanobu Ando), on the other hand (and courtesy of a deprived childhood, we’re assured), has been in prison many times – once, we learn, for raping the Warden’s wife – and is as tough and violent as Ariyoshi is soft and vulnerable. In prison, at least.

The juvenile prison into which they are placed is one of those in which the authorities have negligently forgotten to release many inmates who ceased to be juveniles many years ago. Kazuki immediately assumes the role of Ariyoshi’s protector, and keeps him out of harm’s way. A tenderness develops between the two, spawned as they gaze out meaningfully at a Mayan (?) pyramid and a rocket launch site and contemplate the place of their bond in the wider cosmos. That incipient bond, and the protection which Kazuki affords his delicate mate, make things very difficult to comprehend when Ariyoshi is found astride Kazuki’s dead body, muttering, “I did it.” Enter the Police.

The prison itself is so stylised that one never gets a sense of life within it. The place where Ariyoshi and Kazuki reside shares some features with prisons (a mess hall, cavity searches etc) but no more than it shares features with, for example, an experimental theatre production. Even Kazuki’s tattoos seem more interior design than Yakuza.

This is not unusual, it appears, for a Takashi Miike film. Miike prompts people to write things like, “Big Bang Love joins… the Miike pantheon of hard-edged ontological essays pushing at the limit of representation.” (Nathan Lee, The Village Voice).

So that’s what it was. I just thought it was self-consciously weighty and weightily self-indulgent, with a few splendid visual images thrown in and a nice line in homoeroticism.