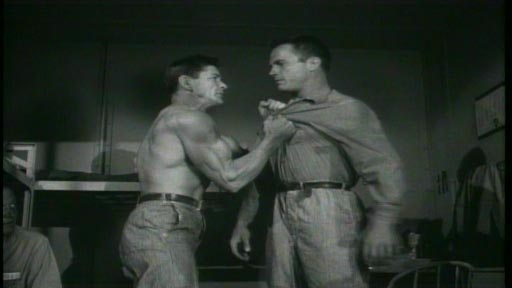 This is something of a companion piece to Canon City (1948), matching the earlier film for mountain location and smugness… though in this case the smugness doesn’t belong to the prison, but to the FBI. It features an impressive cast and Charles Bronson’s muscles.

The action kicks off with a young boy suffering an asthma attack at a high-altitude summer camp in Colorado. He runs away to avoid having an injection, and is conveniently found by Jerry Barker (Ralph Meeker) who, rather than take him back to his wealthy dad, hides him away in a condemned look-out tower and sends his father a ransom note demanding $200,000.

It’s all going fabulously well until the boy tries to escape, falls from the tower and kills himself. No problems; Barker just throws the kid’s body into the gorge and heads off to collect the money. FBI agents, who have been called in to (a) find the kidnapper and (b) narrate the story, arrest Barker with the help of the local Royal Gorge park rangers.

Barker maintains that he never had the kid, but simply took advantage of the knowledge that the boy was missing to extort money from the rich father. The FBI can’t prove otherwise, and Barker gets 1 to 5 for extortion, which sees a bit light on given the level of callousness and the fact that a good proportion of the ransom money remains unrecovered. He earns the nickname ‘The Iceman’ from the press on account of his ‘frozen face and icy eyes’ during the trial.

There are plenty of prisons in nearby Cañon City, but he is taken to the Cascabel Island Prison, for reasons that become apparent later. ‘Cascabel’, we’re informed, means ‘rattlesnake’ in Spanish; maybe that makes the prison sound more exotic (or tougher than ‘Alcatraz’, which means ‘lilies’ or ‘pelicans’, depending on who you believe). The warden soon describes him to the FBI as “cold as a clam but likable”. We get it; he’s a psychopath.

He is immediately placed in a cell with four lifers, the most dangerous cons the prison could assemble: bank robbery consultant and strategist Rollo Lamar (Broderick Crawford), ‘mad dog-type’ killer Benny Kelly (Bronson), narcotic smuggler and border killer Leonard ‘Alomo’ Smith (Lon Chaney Jr), and hitman William ‘Machine Gun’ Smith (Willim Talman). All of them believe The Iceman harmed the kid, and none will (at least to start with) have anything to do with him; but they don’t bash him and they don’t kill him – not even Benny, who supposedly kills just because he likes it. Instead, Benny looks for excuses to parade around without his shirt on to show off his impressive biceps.

The Iceman keeps his shirt on, and never quite lives up to his name inside the prison; he may be tough, but we get to see neither the charm nor the coldness of the best psychopaths. He seems to live up to his sentence and not his reputation.

Lamar is more interesting, and not your ordinary crook. He is clearly the brains of the outfit, and has a wonderful combination of noirish gangsterism and unlikely erudition.  “Well, The Iceman Cometh”, he says as Barker is shown into their cell. Soon afterwards, he arranges for one of his men to be steamed alive to reduce the likelihood of his escape plans being revealed. And later, when he decides that Barker might be a gateway to some easy money, he has this delightful exchange to ensure that the new fish doesn’t rat on the others over the steaming incident or their escape plot:

Lamar: I’ve got news for you. What you saw, forget it. If you don’t, I’m gonna step on ya and squash ya.

Barker: Look, you. Top dog, big wheel, boss con or whatever you rate around this iron lung, you don’t scare me. OK, so all the pimps and perverts and pot-lickers got no time for me. Fine. But nobody around this joint calls me a squealer.

Lamar: I appreciate your ethical outlook.

Barker: Well, appreciate it someplace else, because it’s hate that goes two ways.

Lamar: Hold it! Have I ever said anything to deprecate you?

It’s the only known occasion on which the word ‘deprecate’ has been uttered by a prisoner in a prison movie (if it is a prison movie – there is relatively little prison life shown, other than the cell and the boiler-room, from where they plan to make their escape).

Ultimately Lamar and the others drag Barker along with them in the escape, where they use air tanks (where did they get them from?) to swim underwater to a waiting boat, a task which – it has to be acknowledged – would be considerably more difficult if they had been imprisoned in Cañon City. On the boat, Lamar again shows his dual qualities of ruthlessness and strategic planning, ordering that Benny be killed (notwithstanding that Benny had just saved his life as he was drowning on the bottom of the sea), burned, dressed in Barker’s shirt and thrown overboard in order to throw the FBI off the track.

But he hadn’t counted on the expertise of the FBI, which is of course always one methodical step ahead. FBI agents capture the last of the escapees as they try to retrieve the balance of the ransom. The message: No matter how tough, how organised, how psychopathic the criminal, the FBI will always succeed. I guess that if you allow the FBI to narrate the film, you’ve got to expect a bit of self-promotion.

It might well have been more interesting to have had The Iceman’s commentary. Or Lamar’s. 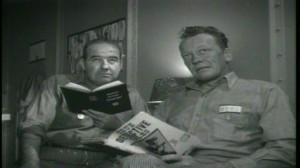 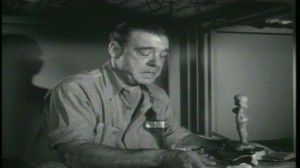