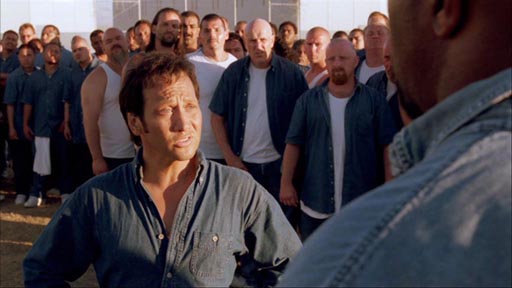 I’m deeply, deeply suspicious of any film where the Director casts himself in the lead role and not only gives himself the best lines, but gets to bed the beautiful woman and be the hero all at the one time. Not even Woody Allen can always pull that off, and Rob Schneider certainly can’t in this limp, misconceived comedy. But it’s not just that. This is a one-joke movie, and when that one joke concerns homosexual rape, or any rape (even if it’s mostly about the avoidance of rape), it’s going to have trouble making me laugh.

Schneider plays Stan Minton, a shonky property developer, who cops three years in the slammer, but after bribing the judge is allowed six months to get his affairs in order before he needs to surrender himself to the authorities. He is driven by his terror of being raped in jail and uses the six months to prepare himself thoroughly for the unwelcome advances that he is sure await him. He enlists the support of The Master, a martial arts expert (David Carradine, naturally) to help defend himself against any attempts to take advantage of him, has his rectal area tattooed in such a way as to deter interested parties, and has his wife sodomise him with a dildo. The last bit of preparation seems to defeat the purpose of the other bits, but he feels prepared, nonetheless.

On his first day in the nick he goes on the front foot with his astounding new Kung Fu ability, and systematically cleans up the jail’s chief sexual predator and then the gang leaders from the Nazis, the African Americans and the Hispanics. Instant Bruce Lee, is Stan. So, despite him being an insincere, self-centred little toad, everyone immediately affords him the utmost respect and what he says, goes. All the hardened crims happily sit around and let him preach a message of peace and harmony: No rapes. No misogynist hip hop. No inter-racial violence. It matters nought that his message is designed entirely to serve and protect his own interests.

Everyone seems happy with this except the Warden, who had drafted Stan to his prison to gain access to his real estate shystering expertise. The Warden, you see, has a pre-retirement plan to engineer a riot in front of the prison’s Board members, forcing them to close the prison and sell it to a development company in which he has a significant pecuniary interest. The plan obviously won’t work if the prisoners adhere to Stan’s principles and refuse to attack each other, but then Stan is offered an inducement of early parole if he renounces his pro-social leadership. It’s hardly a novel dilemma (think The Longest Yard, amongst others), and you might guess the rest. 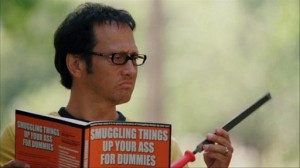 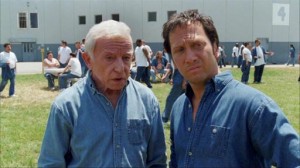