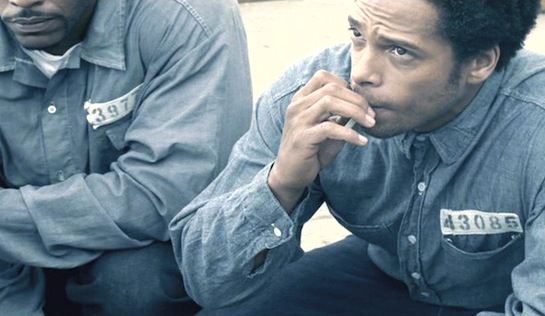 I remember reading Soledad Brother in the 1970s. Or bits of it. Black August paints a different sort of picture of its author, imprisoned African-American activist George Jackson, to the one I vaguely remember from all those years ago. He’s more poet, less revolutionary; more the artist, less the polemicist… even as he is advocating violence as the only means by which his goals might be achieved.

Black August tells the story of Jackson’s final fourteen months. Sentenced as an 18-year-old in 1961 to one year to life for an armed robbery on a gas station that netted him $70, Jackson was introduced to Marxism in Soledad Prison and began organising other black inmates. The authorities, presumably fearing his influence in the community were he to be released (given his connections to the Black Panthers and the Black Guerrilla Family, which he co-founded in prison), kept denying him parole.

In January 1970 Aryan and black prisoners clashed in a riotous disturbance in an exercise yard in Soledad. A white tower guard shot three black prisoners dead, including Jackson’s friend and mentor, WL Nolen. Four days later, a white guard was stabbed and thrown over the rail from the first tier of a cellblock; Jackson and two others were charged with the murder on the basis of statements made, the film suggests, by prisoners given inducements to nominate him as one of the killers. The tower guard was found guilty of no wrongdoing; the deaths seen as justifiable homicide.

The film picks up the story with Jackson (Gary Dourdan) in San Quentin, awaiting trial for the guard’s murder. He is introduced to a white book editor, David Dryer (Darren Bridgett), who is keen to publish a collection of Jackson’s letters from prison – to lawyers, family members, and others. Dryden is a Harvard graduate and naive about prison and black politics; the self-educated Jackson has already spent seven of his first ten years in solitary, has endured a lifetime of racism, and is articulate and angry. “I’m a political prisoner, man. They’re afraid I’ll take revolution to the streets.”

The relationship between the sympathetic Dryer and the charismatic activist is at the heart of the film. It gets off to a wobbly start, but Dryer becomes Jackson’s major support. The authorities are aware that Dryer is not the legal assistant he purported to be when he first gained entry to San Quentin to meet Jackson, but do nothing; Federal agents have every meeting between the two bugged and the intelligence is too valuable to do without.

In August 1970 Jackson’s 17-year-old brother, Jonathan, storms a Marin County courtroom and, with the assistance of three prisoners whom he frees, takes the judge, a Deputy DA and three jurors hostage, demanding his brother’s release. Police fire on the van into which all nine are bundled as it tries to depart the court precinct, killing Jonathan and two of the other prisoners. The judge, who has a gun taped to his neck, also dies and several of the others are wounded.

As Jackson’s murder trial approaches, Dryer is very excited at the prospect of acquittal (notwithstanding Jackson’s principal lawyer pulling out after receiving death threats), while Jackson himself becomes increasingly conscious of the ethical betrayal that a plea of not guilty (to an act which he fully condoned) would represent. In August 1971 he uses a smuggled gun to attempt to escape, and is gunned down by a tower guard. There have been suspicions raised about whether Jackson’s death was the result of a conspiracy and covered up, but Tcinque Sampson, a drug dealer who spent 22 years in prison (some of which, apparently, was in the cell next to Jackson in San Quentin) and who wrote and co-directed the film, seems to accept the official line.

While we see little of San Quentin outside of the visit areas, the prison’s contribution to Jackson’s resolve and commitment to the cause is ever-present. The environment makes the revolutionary message for Jackson more urgent. We see the chains placed on him every time he is moved from his cell, only for them to be taken off when he’s with Dryer. We see the prison enabling the Feds to tap into the private meetings he has with Dryer, in a way that makes you wonder about the legality of the bugging. And we see the book publisher excited about Jackson’s letters – largely because they are written from prison. Prison looms large throughout.

But this is not just a story about a talented African-American activist in prison. It serves as a reminder of how repressive prison treatment can foster and sustain all sorts of revolutionary thought; whether Islamist or left or right wing extremism. And revolutionary art, as well. 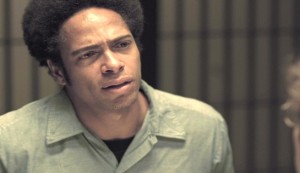 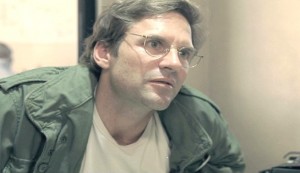 Thanks again to Melian!