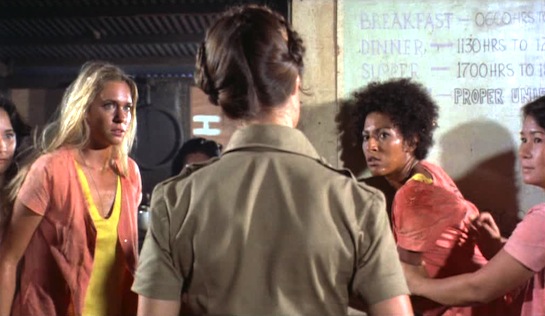 I was hoping that the 20 minutes of action in this film that takes place in a prison – 20 minutes more, it must be said, than The Defiant Ones (1958), on which the story is loosely (and not very seriously) based – might have given this a prison movie feel. I was wrong.

It kicks off with two women being newly received into the Women’s Rehabilitation Center on a carefully unidentified island in South East Asia. As the Manila police later roll up in a car marked ‘Province of Rizal’ you might reasonably assume that it’s in the Philippines. Maybe it’s hoped that the more mysterious the location, the more it might lead patriotic American audiences to mistake it for an American tropical island populated almost exclusively by Filipinos and lustful American prison guards.

The women are Lee Daniels (Pam Grier), a black hooker who has $40,000 of her crime boss pimp’s money which he wants back, and Karen Brent (Margaret Markov), a white woman from a rich and prominent family on the island, who has joined a band of revolutionaries who are trying to overthrow the government. From the outset the women are pitted against each other, disagree on politics and the expediency of acceding to the lesbian matron’s advances, are punished together in ‘the cooker’, and are ultimately chained together en route to a higher-security prison when their bus is ambushed by Karen’s revolutionary mates, allowing them to escape.

They fight, resolve to get along, dress as nuns (still chained together), wear skimpy yellow prison uniforms which show up nicely against all the jungle foliage, and evade capture. There is sleazing and gunslinging. In pursuit of the women are corrupt cops, an American crime boss moonlighting as a bounty hunter, a Justice Minister, the pimp’s men and the revolutionaries, to name just a few… all of whom manage to achieve neither success nor discernible dramatic impact.

It is so devoid of ideas that the closest it gets to character development is that Grier wears black underwear and Markov white. Very, very missable. 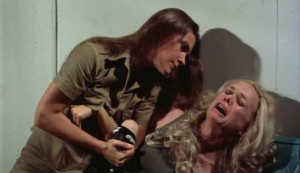 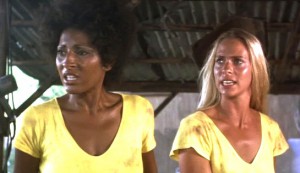