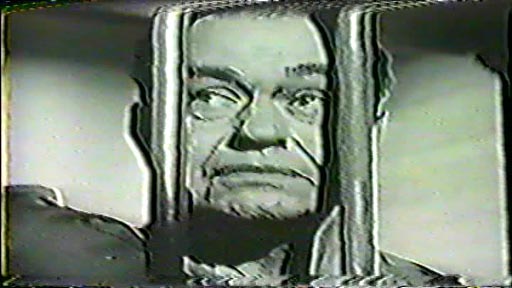 The only copy of this movie that I could find is of such poor quality that much of the film looks like it was shot underwater with a filter held in front of the lens by a cameraman with delerium tremens. Which is a shame, because the effort to watch it is repaid mightily; it is a noir gem.

Vince Canelli (Edward G Robinson) is a swaggering ‘racket czar’ responsible for 17 murders. Peter Manning (Peter Graves) is a cop killer who still has the $200,000 proceeds from a bank robbery salted away. Both are on Death Row. Both are due to go to the chair on Black Tuesday.

One of their keepers, the thoroughly decent John Norris (James Bell), returns home on the night before the execution to find Canelli’s moll Hatti Combest (Jean Parker) on the couch where he would normally see his daughter, Ellen (Sylvia Findley). Hatti offers Norris a swap; if Norris returns her Vince to her, she’ll return his Ellen to him.

Norris keeps his end of the bargain, smuggling in a gun which he leaves for one of Canelli’s men, who is masquerading as a reporter covering the execution. Canelli and his men don’t exactly keep theirs, shooting Norris dead when he tries to stop more carnage as Canelli is sprung. Canelli frees all the other Death Row inmates, including Manning, who has rejected a kind offer of a ten-day deferral of his execution if he tells the bank where the money is, but whom Canelli hopes will spill the beans and fund their getaway.

They escape under a hail of bullets. Manning catches one, and it appears that he might not live to give up his secret. Luckily one of the escapees’ hostages (which include a priest, one of the hateful guards, the reporter substituted by Canelli’s man at the execution, and Ellen) is a doctor – who operates on the badly wounded Manning and saves his life.

Manning recovers sufficiently to retrieve his money, but the gang’s hideaway is soon surrounded by Police and there appears no way out… particularly when the Police Inspector in charge refuses to negotiate with the gang, even when they start throwing out the dead bodies of hostages.

It’s a great little gangster film, full of snappy dialogue and lots of smouldering tension between the key players (from Canelli and those who are a little unnerved by his psychopathy, to the Catholic policeman full of guilt at the likelihood that he has condemned a priest to die). Edward G Robinson is magnificent, and the others are awfully good as well – even though they are clearly doing every scene underwater (or perhaps because of it).