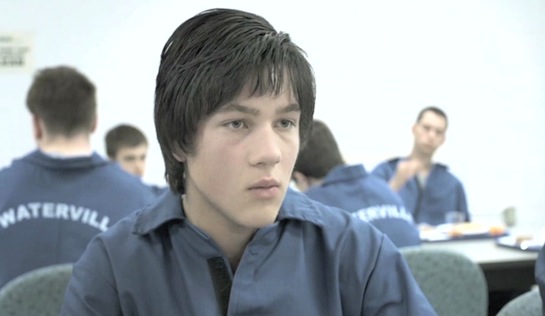 It might not be perfectly sensible to liken a person unable to escape bullying to a person trapped in prison. The bullied Sean Randall chose the one way he thought he could fight his way out of feeling that trapped. Then he went to prison and was bullied there, too. So he wanted out, desperately, but on being released was subject to restrictions that made him feel he was back in prison. Tricky.

Sean (Connor Jessup) is 15, 16; a slightly dweeby-looking, anarchic Goth. He doesn’t like the hockey jocks at school, and they really don’t like him. He is mocked, tormented, bullied. In response to which he fantasizes about mowing them all down; sparing not even the beautiful Deanna (Alexia Roy), who joins with her hockey captain boyfriend and his cronies as they taunt him at school… and then confusingly seeks him out on the bus on the way home.

Sean’s on-line musings about revenge are discovered, and he is arrested. The police find loaded guns at his home. The town is certain that it has averted a massacre. The hockey team celebrates; his charges confirm him as a freak. He is remanded in custody.

At the Waterville juvenile prison Sean continues to have a rough ride. The other boys, led by the intense Trevor (Alex Ozerov), who killed a man when he was 12, call him ‘Columbine’; he is an outsider in prison as well, and lives every day under the threat of violence. It gets to a point where he pleads guilty just to get out of prison, and is released with restrictive conditions – including that he goes nowhere near the school and has no contact with the 27 people he listed in his revenge story.

But this doesn’t go so well; the restrictions on him are onerous, and his court-sanctioned ‘dangerous’ tag continues to make him a target. In trying to retrieve a bit of a normal life for himself, he finds himself promptly recommitted to prison, where Trevor is angrily waiting in anticipation of the prey that escaped him once before. It is a sad, vicious cycle of abuse.

Jessup is excellent throughout in his awkward teenageness. Michael Buie is just as good as his father – not brilliantly equipped to deal with such things (who is?) – but sticking by his son. And Ozerov is terrific, too, as the prison’s scarred, belligerent top dog whose wounds from his past are still fresh.

For all of the poignancy of the story of a kid pitted against small town thinking, where tragedy lies in over-reacting and fear makes under-reacting unthinkable, there’s an inconsequential scene in Blackbird that has stayed with me more than any other. Sean, the outsider, arrives in prison and threads his way to his cell. As he sits on his bed reflecting on just how he got to that point, the buzz of the young prisoners outside – boisterous, testosterone-filled, intolerant – intrudes into the cell and captures the energy of prison quite beautifully.

Blackbird is lots of things: a quirky love story, a story of reconciliation and courage. And more. It is moving, troubling, challenging; a fine film. 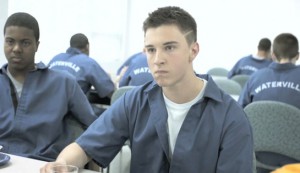 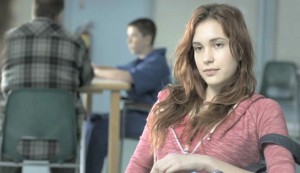