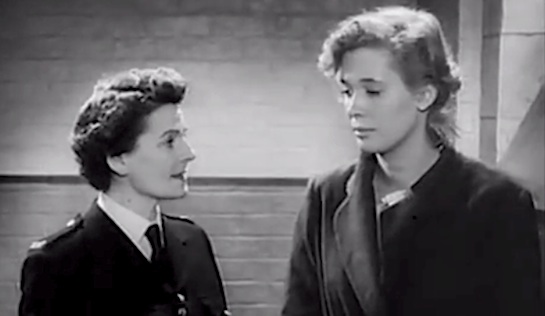 This was released as Women Without Men in Britain – a title suggestive of something a bit wild or scandalous. It’s neither of those. I suppose that if one takes the title at its most literal, it’s indisputable that the women prisoners are without men. And although she might not agree, the lead character, Angela Booth (Beverly Michaels), is decidedly better off for it.

Angela is a small-time showgirl from the States who has made it big in London’s West End. She is surprised in her dressing room by Nick Randall (Jim Davis), her lover from whom she has heard not a word in three months. Nick tells her that he has to go away for a further three months, promises to marry her at the Oxhead Inn on New Year’s Eve, and vanishes. It seems fishy.

Angela goes back to tell her sponsor, Julian, who made her a star, that she’s moving on. He gets angry, assaults her and, in self-defence, she hits him with a mirror. He presses charges and, because he is well-connected (and there would be no story if she were not incarcerated), gets her six months inside.

She doesn’t handle her jail-time well. She mopes, has no way of telling Nick of her predicament, and fears that he might abandon her when she is not there to marry him on New Year’s Eve. Not even the prison’s most diverting characters Cleo (Joan Rice), a lusty bigamist with a French and a British husband living together and both waiting for her return, and ‘Gran’ Ramsey (Thora Hird), a roguish, grannyish recidivist, can get her out of her malaise.

In the background, the US State Department is just as troubled by Angela’s imprisonment as she is. It has been chasing Nick Randall for some time, believing him to have collaborated with the Nazis during the war, and to have been allowed to escape from a Nazi prison camp. He has not long ago also killed agent Kent Foster’s partner, who was on his tail. Foster had hoped that Angela would lead them to Nick, and her imprisonment makes things awkward. In London he begins working with Inspector Hedges of Scotland Yard, and together they bring Angela out of prison on some lame pretext, and happen to drop a few highlights from Nick’s career in a conversation designed for Angela to overhear. Angela is shocked, but remains true to her beloved.

The State Department and Scotland Yard are forced to move to Plan B. They seek the prison’s help in finding someone who they might assist to break out, provided that she takes Angela with her. The prison has the perfect candidate: Gran, who has a proud history of escaping. So, during a New Year’s Eve concert, Gran and Angela throw the prison into chaos by shorting the lights, and then sneak out, dressed in officers’ uniforms. But to complicate matters, a Spanish girl, Marguerite Chavez (April Olrich), who is about to have her prison-reared child taken from her and placed in an orphanage, tags along for the ride. The third escapee is unplanned and catches the prison unawares.

We then have a thriller of sorts. The local British constabulary don’t know that it’s a set-up, and are trying to track the trio down and arrest them, while Scotland Yard is trying to keep them out. After Marguerite is able to hand her child to people who will look after her until she is released, Gran and Angela commandeer the car of a drunken reveller and get Angela to the Oxhead Inn just in time. Nick is there, as promised, as are the secret service agents who are as eager to make his acquaintance as is Angela.

This is a classically comfortable, post-war prison flick. The prison itself is orderly and full of mature, good natured, colourful prisoners and wise and sensible officers. The Governor and her senior staff have an unusually cosy relationship with Scotland Yard, and are only too willing to allow a couple of escapes in order to catch a Nazi collaborator. It’s an enjoyable, if not entirely probable, drama laced with gentle humour and, like many of the ’50s women-in-prison films, is well worth a look. 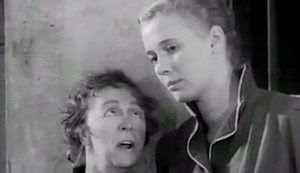 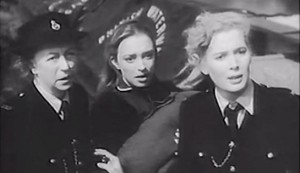