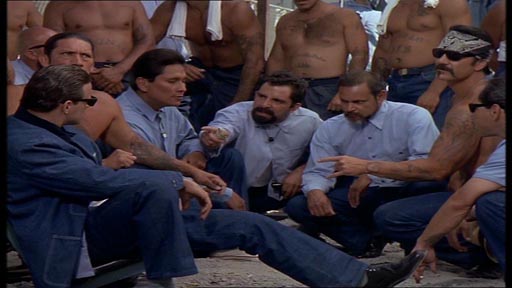 Alternatively known as ‘Blood In, Blood Out’.  Described as an ‘epic’ story by the film’s publicists; for this, read ‘long’.

Loosely based on the true story of poet Jimmy Santiago Baca, the film traces the story of two Hispanic half-brothers and their cousin in Los Angeles in the 1980s and 90s.  A fight with a rival gang while they are just (very old looking) teenagers sees the three head off in very different directions: Miklo (fair skinned and blue eyed, just to make his acceptance into the Chicano gang culture more challenging) to San Quentin prison after shooting the other gang’s leader, Cruz (an artist, left with a damaged back courtesy of the other gang dropping him on a fire hydrant) into drug addiction, and Paco into the Marines and drug enforcement.  In jail, Miklo has to prove himself to La Onda, the Hispanic prison gang, by killing the leader of the white gang and there are plenty of violent interludes between the rival gangs. In particular, San Quentin’s narrow tiers (or this representation of them) seem particularly good for blocking the path of enemies or dangling or throwing them over the railings; some OH&S issues there, one would expect.  Miklo gets out and (in a scene positively dripping with significance) has one leg blown away by Paco during an armed heist, but once back in prison still rises to rule La Onda.

There’s scheming, bloodshed and tragedy aplenty but ‘each, in his own way, strives for power and respect’ (thanks to the film’s blurb) and none can shake the familial ties that bind them.  If after three hours you still care about any of the characters, you’re better than me. 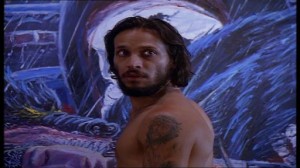 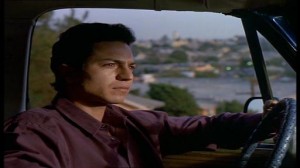