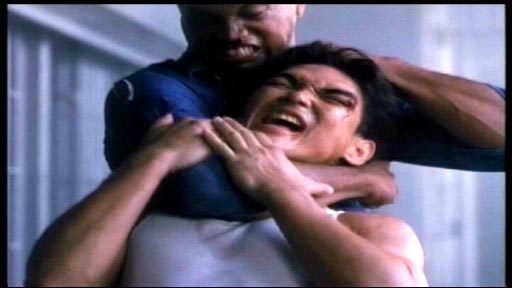 It appears, to my surprise, that some people actually enjoy watching kickboxing movies. They may even like Don ‘The Dragon’ Wilson, who was apparently a kickboxing champion of some note. That, of course, makes neither Wilson an actor of any ability, nor this film which features him a movie of any merit.

Wilson plays Jimmy Boland, who is serving a 10-year stretch in a Los Angeles prison for manslaughter – after someone got killed in a club fight. Jimmy infers that he didn’t do it, or did it in self-defence, but rather too often the prisoners he tangles with happen to finish up dead, just like the unfortunate nightclub guy.

Jimmy can fight. He starts off killing Luther, an African American who has just raped and killed a young black prisoner Jimmy was asked to look after, and that puts him off side with Luther’s partner-in-crime, Blue (Gregory McKinney), and many of the other African-American prisoners. But not Samuel Stark (Richard Roundtree), Jimmy’s cell-mate and jailhouse lawyer, who preaches non-violence, used to be a thorn in the side of the Warden, and is on the verge of parole.

At the same time Jimmy manages to upset the White Supremacists (played in such a way as to avoid the Aryan prison stereotype, but in doing so managing to throw the xenophobic baby out with the Aryan bathwater), who have delighted in him killing Luther but are offended by him declining to join their gang. This brings about a very unlikely alliance between Blue and Wheelhead (Rick Dean), the head of the White Supremacists; both want both Jimmy and Stark dead – Jimmy because he has insulted them, and Stark because he preaches non-violence, looks wise and is a nuisance to the corrupt administration that affords their gangs a degree of protection.

This is clearly a fight movie set in a prison, rather than a prison movie in which there are fights. The telltale signs: when the fighters deliver a kick to the head that sends an adversary flying, they mostly wait for their opponent to get back on his feet before resuming the bout. In a more credible prison movie, if his opponent were hurt, Jimmy and 15 of his crew would be rushing to inflict a bit more hurt before the prone man could recover.

By the end of the movie Jimmy has been passed the baton of ‘counsellor’ by his mentor, Stark. It’s an interesting notion: if you can protect the vulnerable with your fists, you can fight for the downtrodden through the law. Stay tuned for Bloodfist IV: Forced to Practise Administrative Law.

When I first chanced upon the deplorable Live by the Fist (1992), I didn’t realise that it was essentially a remake of this earlier, marginally-less-awful film.  Or that a second remake, the futuristic (and reportedly woeful) Women-in-Prison flick, Caged Heat 3000, had been released in 1995. You do have to wonder why such a horrible script was reprised once, let alone twice.