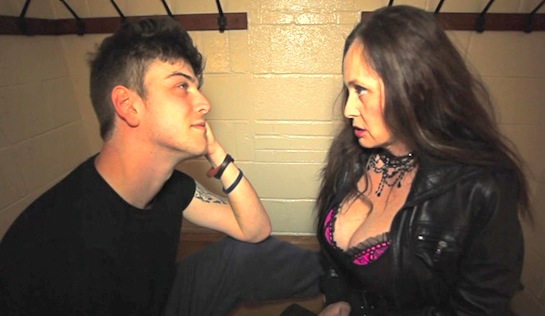 The first Boys Behind Bars (2013) was a cheap and nasty film saved from being solely an exercise in debasement by an engrossing performance by Wade Radford as the most diabolical of three prisoners who prey on a younger, vulnerable fourth. While Radford reprises his role as Darrell from the original film, this sequel has absolutely nothing to commend or redeem it. It is a very strong contender for the worst prison film I’ve seen.

As you would expect, Darrell remains a voracious gay man who inhabits the prison as if it were his playground. Once again he is locked into a confined space (this time a change room with two other young prisoners while yet another disturbance is apparently happening elsewhere in the prison) and all the action is confined to that change room and its toilet. And once again the production team is spared both the expense of filming scenes in more than one location and the need to address how Darrell, supposedly the prison’s top dog, would fare if he were to encounter any experienced prisoner with a bit of dash.

His two youngish companions here are twins (and prison newcomers) Ross (Connor Paganini) and Richard (twin James Paganini). From inside the toilet Darrell overhears Ross boasting about the drugs he is holding, and he quickly asserts himself as the only one to be dealing drugs in his patch. As Darrell menaces Ross with a blade, the appeasing Richard is forced to come out as a gay man to his homophobic brother after not resisting Darrell’s attentions. All of which follows a similar trajectory to the first Boys Behind Bars, with desolate, humourless, sex-laden banter masquerading as ‘mind games’.

But then the Wing Governor, Mizz Muncher (Honey Bane), enters the change room, dressed (in the way of most Governors) in a black leather jacket and mini skirt, showing ample cleavage and carrying what is said to be a shotgun. Hmmm. She and Darrell are clearly and corruptly in cahoots. She rapes Ross with the gun. He hands over his drugs. Darrell knocks her out with a cosh and ties her up (with rope that happens to be in the change room, just as most prisons have rope lying around in all sorts of places) to show her who really runs the wing. She comes to. Darrell and Richard have sex in the toilet. Ho hum. The gun is left lazily lying around, able to be used offensively or defensively by Muncher or any of the prisoners, or to blow off the lock to the door… but is not. In the end Muncher shoots an inexplicably submissive Ross with the gun inserted in his rectum to comply with Darrell’s pact for her release. Richard pretty much shrugs at the murder of his brother, preferring to carry on canoodling with Darrell. Muncher admonishes Darrell with “… if you ever pull a stunt like that again…” and prison life, it is expected, will continue on as before.

Whereas the original Boys Behind Bars relied on a gritty purported reality for impact, the sequel looks very much like Radford playing out someone’s bizarre fantasies. The film sets out to wallow spectacularly in its trashy immorality, but its chief achievement is instead to be stunningly bereft of any wit, visual interest and coherence. It is simply low-budget crassness; its capacity to shock undermined by its sheer boring inanity.

Avoid it if you can. 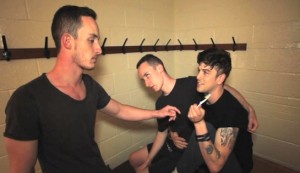 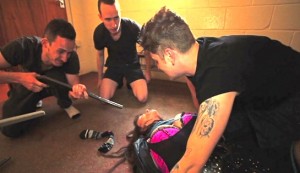