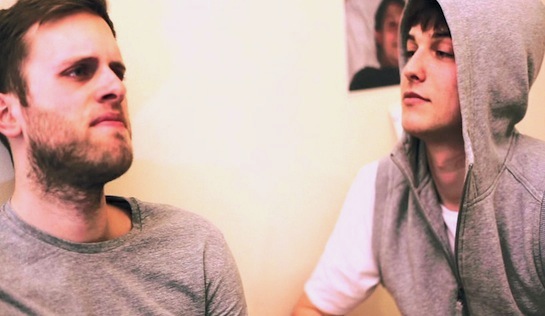 Like Stoic, all the action here takes place in a single maximum-security cell. At least, that is what it purports to be. It’s an unsewered cell (solely, it seems, in order to facilitate the contents of the slop-bucket being an integral part of the story), but has a big opaque window and would not appear to be remotely representative of those Victorian-era cells where there is no in-cell toilet.

The cell belongs to Darrell (Wade Radford). But he is joined, successively, by three others: Seth (Tama Phethean), Lanks (Gavin Jackson) and, late in the piece, Nico (James Whitehurst). There is an emergency on an upper tier with a knife-wielding prisoner threatening to kill himself. Why this necessitates certain prisoners being thrown into others’ cells is far from clear. At the same time there are some vaguely riotous sounds above them. Why this necessitates prisoners on other tiers being thrown into others’ cells is also far from clear.

But there they are. Darrell is in his element in prison. This is his territory. He has confidence and power. He is a brash, rapacious gay man and a voracious drug user. Seth is straight, and solemn. Lanks is a (lanky) unpleasant thug who has sex with males in prison. They, too, are drug-craving. The trio’s conversation is unedifying; a mindless, relentless loop of sex, taunts, flirtiness, drugs, abuse, and scatology. And annoyance at the disruption to their routine, always followed by calls for the knife-wielder to kill himself to allow the emergency to be stood down.

Then Nico, a younger, inexperienced prisoner who has already endured some trauma in prison is added to the group. Why it is necessary to throw a vulnerable prisoner into a cell with two known predators is far from clear. The three older prisoners turn their attention to from each other to the frightened, whimpering Nico… and move in for the kill.

Yet it is not until Nico’s arrival two-thirds of the way through that the film departs from the merely crass and trashy; it steps up several notches, but needs to. The pack mentality and viciousness of the older trio, and their manipulation of the helpless, terror-stricken Nico, are unnerving and compelling. It is uncomfortable to watch, reminding me of the power imbalance and the inevitability of the defilement in Jailbait (2003).

Director Jason Impey sadly doesn’t agree. With Radford (who is credited with devising the concept of this movie) he has made several more in the series – Boys Behinds Bars 2, 3 and 4. I’m not greatly looking forward to them.