The copy-cat phenomenon is not unknown in prison; suicides, escapes, riots. And prison movies, too, it seems. We saw it in 2015 with the close releases of Riot and Vendetta, both featuring cops who go into maximum-security jails to avenge the killing of their wives. Recently, we’ve had two Indian movies, Lucknow Central and Qaidi Band (2017), both with innocent prisoners following their pop-stardom dreams in prison bands. And here, hot on the heels of Shot Caller (2017) – released just seven weeks earlier – is another action flick about a man embarking on a mission of extreme prison violence in order to protect his wife and child.

It kicks off with Bradley Thomas (Vince Vaughn) having a really bad day. He gets laid off from his tow-truck driving job, and returns home to discover that his wife has been having an affair. His dismantles her car with his bare hands, but then calmly walks inside and – conceding that things haven’t been the same for either of them since she miscarried – commits to staying together and trying once more for a child. Oh, and running drugs for an old buddy.

18 months later and it’s clearly working out well. His wife, Lauren (Jennifer Carpenter) is expecting and they are suddenly living in a big, expensive house. Well, it’s working out well until his boss Gil leans on him to pick up an off-shore drop in company with two goons belonging to a new business contact, Eleazar (Dion Mucciacito). Bradley reluctantly agrees against his better judgement; he’s certain that one of the goons, Roman (Geno Segers) is on the gear. The pick-up goes horribly wrong; Eleazar’s men disobey his instructions and finish up in a gunfight with police. Bradley wades in when he could have waded out. He shoots one of the men and facilitates the capture of Roman who is trying to kill police… yet after his arrest won’t do a deal to give up either of their bosses. He expects to pick up four years on account of saving police officers’ lives. He gets seven.

Life doesn’t look too bad in the modern, clean, medium-security Franklin R James Detention Centre (nicknamed ‘the Fridge’), where he starts his sentence. But soon he is told that he has a visit – from his wife’s obstetrician. That can’t be good news. And it’s not; it’s one of Eleazar’s men, who tells him that his wife is being held hostage and that his act of betrayal cost Eleazar $3.2m, which he wishes to recover. He shows Bradley a picture of Lauren, bound and gagged. But, he says, the debt can be repaid if Bradley wastes another prisoner. Oh, and one other matter: the prisoner is in the maximum-security prison, Redleaf, in Cell Block 99. In the event that he doesn’t succeed in repaying the debt, he’s told, a Korean abortionist – who claims to be able to clip the limbs of a foetus, but leave it still able to be born – is standing by, waiting for instructions.

How does a vaguely pro-social, patriotic prisoner and expectant father with a crucifix tattooed on his shaved head ensure that he gets to maximum-security? A brazen attempt to escape, perhaps? A mad dash for the wall? Incite a strike? Write a manifesto? No, you launch an unprovoked attack on a guard and snap his arm and then take on the responding guards as well. He gets his transfer.

On arrival at Redleaf, Bradley is met by cigar-smoking Warden Tuggs (Don Johnson), and several guns pointed in his direction. Tuggs is more than a little disparaging of the quality of the guards at the Fridge, and a little smug about his own men’s willingness to “deploy some cheap lead” to reduce the cost of looking after prisoners. Bradley gets placed in a horrible old cell with an overflowing toilet, but it’s not in Cell Block 99. No problem; he viciously attacks a number of prisoners and more guards in the exercise yard. And gets to Cell Block 99… a prison within the prison. “I suspect that Amnesty International would frown upon the contents of this room,” Tuggs says. He isn’t wrong.

And that’s where the real fun starts. Amongst the novelty aspects of living in the rustic Cell Block 99 are a ‘stun-belt’ that the Warden, and others, activate spasmodically (and which, being placed over the prison overalls, must impede most bodily excretions; another torture altogether). Bradley is forced to turn Cell Block 99 into a battleground to protect his daughter’s tiny unborn limbs.

Some observations: (1) In other movies, Vaughn’s character would be an ex-Marine, or ex-Special Services, or ex-NYPD. A 6′ 5″ ex-tow-truck driver who can fight is a welcome departure from the usual. (2) Warden Tuggs’ misplaced faith in his testosterone-overloaded staff to combat any prisoner misconduct must disappoint him terribly. (3) The carriage of firearms within reach of prisoners ought not be careless. (4) Bradley comes from a long tradition of action heroes who eschew any unfair advantage. Armed with a PR24 and facing four adversaries, he throws it at the first of them, preferring to fight with fists (and giving his opponents the chance to use the baton themselves). (5) Cartoonish violence can still elicit a decent galvanic skin response. I’m told.

This is pretty standard action movie fare. Which is not to say that’s it’s not entertaining – it’s just nothing new. 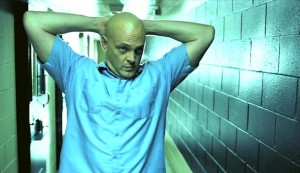 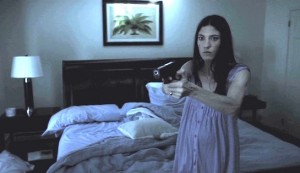 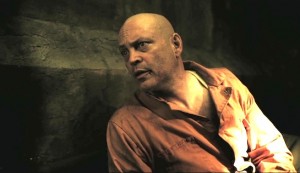 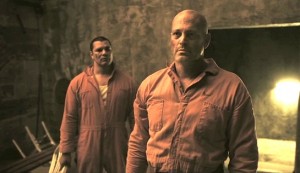