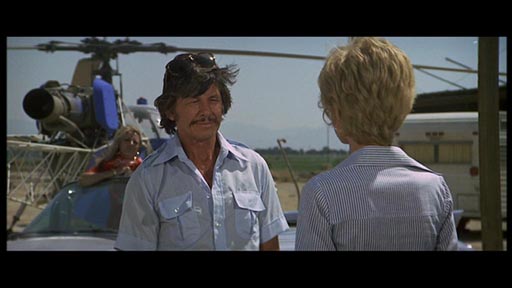 It’s a bit disturbing that a laconic Charles Bronson is the best thing about this action thriller which, it must be said, is rather devoid of thrills. It’s also a bit devoid of characterisation, which is pretty standard for this type of film, but at least Bronson gets the job done without being superhuman. That’s a plus.

Jay Wagner (Robert Duvall) is framed for a murder in Mexico by his own family, whose business interests he seems to threaten, and a CIA-type agency. Why is not clear. Police, prosecutors, judges, prison officials… they’re all taken care of and Jay cops 28 years – but with court-endorsed fortnightly conjugal visits to ease the pain.

Jay tries to bribe his way out of jail, having decided that getting out through proper channels is futile. He’s right. He gets taken out of the prison in a coffin, but rather than be sprung there and then is buried with the coffin’s rightful occupant. The film doesn’t show you how he manages to get out of this scrape, but he does. Which is a good thing, because the film would have died along with him. And a bad thing, because it immediately surrenders any notions of credibility.

Jay’s upper-classish wife Ann (Jill Ireland) then enlists the help of a knockabout Texan pilot Nick (Charles Bronson) for escape bid #2.  Oddly, Nick makes it his mission to get Jay out after he speedily aborts a first attempt, Ann having neglected to tell him that the flight into Mexico is to rescue her hubby from a chain gang and that the prison guards are armed. You can only presume that the reason he wants to help her is because he is grimy, uncouth and American, and is naturally attracted to Ann who is refined, wooden and English. And rich, it must be said.

There’s a quiet humour throughout, and Bronson is OK (even though the expected sexual tension between him and his real-life wife Ireland scales no heights at all), and as an action hero he mucks up rather a lot. His attempt to smuggle a disguise into Jay using his business partner dressed as a woman, for example, is woeful and quickly discovered. Mind you, the Mexican authorities are generous and simply throw the escape conspirator out on the street (and kick him nastily a few times), rather than lock him away inside. Finally, Nick decides on a helicopter rescue and, unsurprisingly, it is successful after a few unsurprising close calls.

The prison scenes are not particularly interesting. The Mexican guards are generally obese and uniformly corrupt, and the conditions are at times unpleasant. In contrast to the guards, the Mexican prisoners are extraordinarily decent fellows. Jay’s cellmate, the Warden’s stooge, refuses to rat on him even under pressure, and when the helicopter lands in the yard all the prisoners excitedly clamour round, only one of them actually tries to get on board the thing, while they all politely allow Jay to hop on by himself.  It’s good to know where goodness lies. 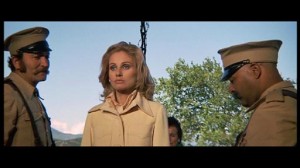 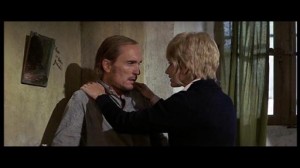