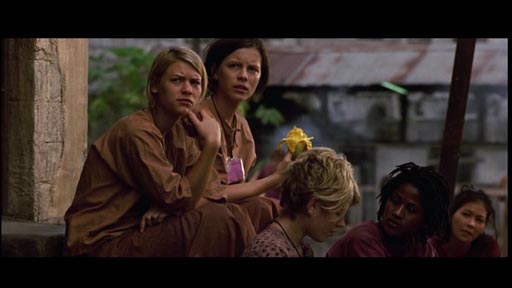 This is not a prison movie really, but rather a Schapelle Corby-esque drug smuggling movie, much of which takes part in a Thai prison after two young American girls, Alice and Darlene (Claire Danes and Kate Beckinsale) get caught with a couple of kilos of heroin in their hand luggage – after having seemingly been set up by a charismatic young Australian.

The Thai prison doesn’t actually look that bad.  You can tick off some pretty standard traps for new players: the fellow inmate who maliciously encourages them to take some forbidden fruit (literally), and much later they get thrown in the hole (also literally) after being predictably double-crossed in an escape bid.  And there’s not much room to sleep (on the floor on mats) and the cockroaches aren’t terrific (one crawls into Beckinsale’s ear), but beyond that, it’s quite comfy.  Well, visits aren’t great, either, with both parties yelling at each other through mesh barriers six or more metres apart.  But there is plenty of room to move about and work and meditate, there are no signs of any real friction between the prisoners (not even one fight), plenty of bowing to the guards in their neat uniforms, no arbitrary punishments, no brutality, no ritual humiliations and no predatory male guards whom they have to ward off.

All the corruption and awfulness is outside the prison: officials turning a blind eye to drug trafficking as long as they get to arrest a mule or two now and then, trumped up charges by the prosecution, and so on.  Symbolically, the toilets in the police cell before they get to prison is a roach-covered hole in the corner, while in the prison it’s in a nice cubicle with discreet, nicely painted privacy doors.

It’s hard to know why anyone would be at all concerned about being in a Thai gaol, really.  Certainly the chief protagonists don’t appear too troubled, but then nor do they spend any time trying to work out who physically put the drugs in their knapsack (if it wasn’t one of them).  All a bit odd, really. 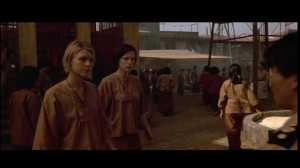 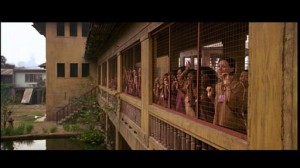