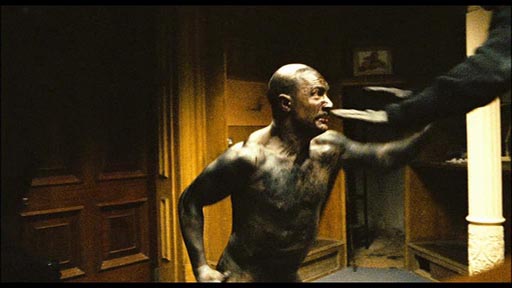 This is a very stylised rendering of the true story of Michael Peterson and his alter ego, Charles Bronson, possibly the most violent prisoner in England, who started a 7 year stretch in 1974 and 34 years on has had just a couple of brief spells on the outside, his term increased by series of sentences for offences committed inside prison – assaults and hostage takings. His stint inside has included 30-odd years in solitary or doing the Largactil shuffle, it seems.

Bronson (Tom Hardy, in a stunning, virtuoso performance to rival Eric Bana’s Chopper) is a pathetic, dangerous man. He is desperate to be famous, and finds that in the nick (and only in the nick) he can be just that. “For most people prison is tough.. (but for me, prison was) brilliant! I loved it. It was exciting, it was on the edge, it was madness at it’s very best… Like a battleground.” The quest for personal significance can lead many young men to prison; most grow out of it by the time they’re 40. Not Charlie.

The British Prison Officers Association was apparently worried that this film would glorify Bronson, celebrating his violent campaign against authority. And it’s true; there are probably lots of people happy to applaud his one-man war and his refusal to be bowed in the face of overwhelming odds. But few would wish to copy him.

Danish director Nicolas Winding Refn gives us a slightly absurd man with a shaven head, an anachronistic moustache (a handlebar apparently modified in the expectation of going through very narrow gaps) and vaguely Edwardian manner to match, and the overall appearance of a cartoon circus strongman. Plus an absolute relish for raw, naked, bareknuckle combat, and an excitement for never-ending battles with the screws. He knows that he ultimately can’t win the fights, but that every stoush helps ‘hone his skills’ and promote his notoriety. His ‘art’. But this is not a gangster movie where the audience might be envious of the power or the spoils; Bronson has spent 30 inglorious years on his own seeking significance. This is an artist who truly suffers for his art.

The film plays up the theatre of his wanton violence, portraying him as a sort of cabaret artist, playing to an unseeing audience. The prison is his special canvas. The Prison Officers, meanwhile, have played punching bags for more than three decades. Some commentators have said the film reflects poorly on them, and on the system that allowed him to be that way. Perhaps it does. But it doesn’t offer any insight as to how he could have been better managed. More than anything, it seems to me to be an advertisement for chemical agents that could have stopped both prisoner and many of those who have guarded him from getting hurt. 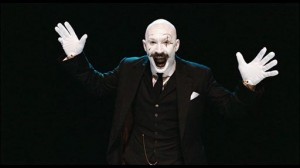